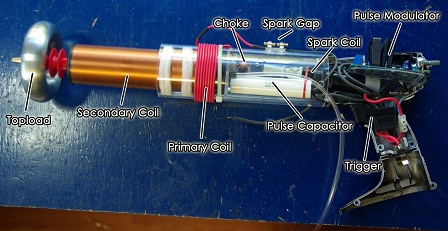 The DIY Plasma Gun II is an improved version of a compact, portable, spark gap Tesla coil which can create jets of high voltage plasma and even doubles as a flame thrower! This updated version of our hand held Tesla Coil has been optimized for improved efficiency and gives a larger output than the previous one. It is also now even easier to build! You can find the old version on the original Plasma Gun page. We decided to stick to a spark gap type Tesla Coil for this plasma gun as it is considerably easier to build and more reliable than solid state controllers. We will however produce a solid state version in future.

This page should show you all you need to know about how to make a plasma gun like the one shown here. Hopefully it will also teach you the science behind it so that you will know how it works. Remember that this is a dangerous high voltage project and should not be attempted by inexperienced people.

What does the Plasma Gun do?

This plasma gun is essentially a small battery powered spark gap Tesla coil. Its inteded purpous is more for education, than an actual function. We hope that is is a fun and interesting project and that you will learn something from it. If you make your own plasma gun, please post a picture below!

The plasma is made by ionizing air around the output terminal of the Tesla coil. The high frequency, high voltage electricity is able to form streams of plasma that can be made to spread out, or be directed forward along a flame or stream of gas. This directed plasma channel can actually have a useful function in some industrial processes known as “plasma surface treatment". When the jet of plasma is directed at a surface such as a plastic bottle, subtle changes will occur in the structure of the material on a very thin surface layer. Typically these changes will make the surface more porous, or easier to print onto.

Anyway, enough of that, we know you really want it just becasue it’s cool, and you want to build your own plasma gun! On to how it’s made…

This part of the plasma gun does the main power conversion by pulsing a high voltage ignition coil. Pulsing the spark coil will step up the voltage from the battery to about 20kV which is used to charge the main capacitor. This capacitor is later discharged into the primary coil of a Tesla Coil to further increase the voltage.

For this we used a Power Pulse Modulator (PWM-OCXI) as it is really simple to use and will give a really powerful high voltage output from an ignition coil. The PWM-OCXI is considerably more powerful than the PWM-OC10A which was used in the original plasma gun project and therefore improves power throughput significantly. This circuit was mounted in the back end of a cordless drill casing so that the control pots and LEDs were accesable from the back. At the side of the drill casing a small switch was mounted that could be used to switch the circuit on and off. This serves as a safety to power down the plasma gun when not in use.

The power to the ignition coil was fed directly from the drill battery via the original trigger switch, into the L- connector on the OCXI. By connecting like this, the control circuit and its cooling fan stays active between times when the plasma gun is fired.

It is neccesary to add a high voltage diode to the output of the ignition coil so that a capacitor can be charged. For this, the rubber end of the ignition coil was removed, and the diode connected to the spring inside the tip. The tip was then filled with epoxy resin so that the high voltage would not flash over the body of the diode. This also helps to cool the diode by absorbing heat from it. The cathode wire is left protruding from the resin so that it can be connected to a small inductor. This inductor serves as a choke to protect the diode from the high frequency currents in the primary circuit.

Primary Tank Circuit
For storing energy in a resonant circuit to be rapidly discharged in pulses.

The primary tank circuit here consists of a high voltage capacitor, spark gap, and a coil of wire (an inductor) known as the primary coil. When the capacitor becomes charged to a high enough voltage, the air between the terminals of the spark gap will break down with a loud bang and a bright flash. During this very brief flash, the energy in the capacitor will be moved into the primary coil and then back again over and over at about 1,000,000 times per second! This frequency of 1MHz is determined by the sizes of the capacitor and the coil and is know as the resonant frequency. The resonant frequency of this inductor capacitor combination can be calculated as follows;

The value of the capacitor is fixed, and the inductance of the primary coil is determined by its size and the number of turns of wire used to make it.

The capacitor used was chosen for improved efficiency over the ceramic capacitors used in the original Plasma Gun. By using a quality polypropelene capacitor with a low ESR and low ESL, the losses in the high frequency resonant circuit are reduced significantly. This means more awesome sparks!

Secondary Coil
Self resonant circuit which magnifies the primary voltage so that it can discharge as plasma streams.

By using 0.25mm wire there is a reasonable amount of copper for conducting current through the coil but due to the small size, only 750 can be fit onto the coil. Without a discharge terminal (topload), the resonant frequency is around 1100kHz. Such a high frequency introduces losses so we can reduce this frequency by adding a larger topload. The toroid used brings it down to a more reasonable 900kHz.

Due to the high electrical stresses, it is important to insulate the coil well with multiple layers of varnish. Although this introduces more dielectric losses, it is essential for preventing sparks flashing over the surface of the coil and for protecting the windings.

Breakout Electrode
For concentrating the electrical discharge in a focused place.

By using a large topload, the electrical field is spread over a large area and will not break out in to arcs until the voltage is very high. While this is advantageous for increasing arc length, it also increases the chances of the arc discharging back towards the coils. The breakout point creates a localised area of intense electric field which will ionise the air more easily and force the discharge away from the end of the plasma gun.

The electrode is fitted with a pipe so that gas can be ejected from the the tip. Some gasses such as Argon or Carbon Dioxide will ionise more easily than air. When ionised it will provide a conductive path, allowing the plasma to reach further from the coil. If butane is used as the gas, it will ignite and also conduct the electric currents. One difficulty with this is that as the arc length increases, it lowers the resonant frequency of the secondary coil causing it to drift away from the resonant frequency of the primary circuit.

Tuning
Precise tuning of the resonant circuits for max output.

There are two resonant circuits in the Tesla coil part of the plasma gun which must be tuned to the same frequency. If the frequencies are not matched, the energy transfer will be very poor and your plasma gun will be little more than a noisy spark gap. The secondary coil’s resonant frequency is pretty much fixed. It is possible to make small adjustments by changing the size of the topload, but this is not very practical to do. Instead, it is simpler to choose a primary capacitor, and then adjust the number of turns of the primary coil to get the right resonant frequency. This can be done with a little calculation and then trial and error, but can be quite time consuming.

We used a signal generator and osciliscope for tuning the plasma gun, but it is possible to do it with a little circuit such as a Telsa Coil Tuner although it is not easy. Even after tuning, you may want to tweak the number of turns on the secondary coil to achieve maximum output. When tuning the secondary, keep it away from yourself or other objects as the proximity may alter the resonant frequency.

Once tuned you can also adjust the Power Pulse Modulator so that you get some good resonant charging of the capacitor. At certain frequencies the system will be more efficient o by slowly adjusting the frequency when it is running, it is possible to find the best setting. While making the adjustments, the spark gap firing rate is observed until a setting is found where the maximum firing rate is achieved.