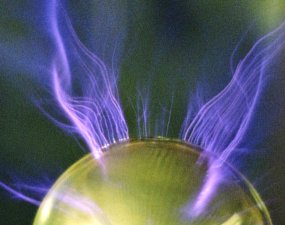 Tesla Coils are air cored resonant transformers. It works by matching all the components in the system so that they resonate at the same (or harmonic) frequency. The end result is that the voltage input is stepped up by a tremendous amount.

Tesla Coils can come in many forms. These two examples are ones we have made for the DIY Devices section. The image in the right shows a battery powered tesla coil which uses an ignition coil driver to charge the tank capacitor. The leftmost image above shows the ‘Plasma Gun’ which is a much smaller hand held version of the other Tesla Coil shown on the right. Also check out our SRSG Tesla coil rated at 1kW!

How a Tesla Coil Works 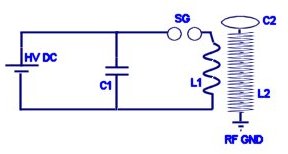 This image shows a simple schematic diagram of a Tesla Coil. There are numerous configurations to choose from. Using this configuration, the TC is powered from a high voltage DC source, such as a rectified output from a neon sign transformer (NST). The device operates in a cyclic manner. This means that a series of changes occur within the circuit, until it is reset and the next cycle begins.

First of all, the capacitor (C1) is charged by the power source (HVDC). When the voltage across the capacitor is high enough, the air in the spark gap (SG) breaks down and allows a current to flow. This forms an LRC (inductance/resistance/capacitance) resonant circuit until the voltage across the capacitor drops sufficiently to quench the spark gap. This all takes a fraction of a second and completes one cycle. The capacitor will then begin charging again. But what about the rest of the circuit? First of all we must understand more about the LRC circuit described above.

When the air in the spark gap breaks down, it is acting like a switch connecting the charged capacitor in parallel with the inductor or coil (L1). As the initial current flows around the LC circuit, energy from C1 is stored in a magnetic field created by L1. When the capacitor is discharged, the magnetic field will collapse. This collapsing field will cause a current to flow in the opposite direction as before, therefore recharging the capacitor. This process will then repeat, causing the current to oscillate back and forth until the energy is dissipated by losses in the circuit and the spark gap quenches. This cycle happens within the other cycle described before, i.e. every time the spark gap fires (1st cycle) the current will oscillate back and forth between C1 and L1 (2nd cycle). The frequency at which the 2nd cycle oscillates is determined by the physical values of the components. This is known as the resonant frequency. The second part of the circuit (C2 and L2) must be constructed so that its natural resonant frequency is the same as the previous part.

A Brief History of Nikola Tesla and the Tesla Coil

The Tesla Coil (TC) was invented in 1891 by Nikola Tesla. It is one of many ingenious devices he created which have paved the way in which our technology has developed. The AC electrical grid, radio transmitters and car ignition systems we use today are derived directly from Tesla’s inventions. So why have most people never heard of him? History seems to record two different versions of Tesla. One is that he was a crackpot inventor and that he made unsubstantiated claims of fantastical inventions, whereas the other version is of an under appreciated, misunderstood genius. It is the former that seems to be the official view, although it now seems as if the true Nikola Tesla was a combination of both these opinions.

Nikola Tesla was born in Smiljan, Croatia in 1856. As a small boy, Tesla had a problem where certain things could trigger visual memories and they would appear to him as if they were real. These images could persist, therefore obscuring his true vision. He learned to control these images before he matured, and could use this ‘gift’ to his advantage.

He had an extraordinary photographic memory, which allowed him to easily learn six languages. He used his visualization skills like we use a CAD program today. He states in his autobiography that he was able to construct machines, test their performance, and disassemble them to check for ware; All in his mind!

Rotating magnetic fields and resonance fascinated Tesla. He often worked continually on his inventions and theories, only sleeping for two hours per day. Tesla always eat alone and would feel the need to measure exactly the amount of food he was about to consume. He was also obsessed with germs, and avoided touching utensils directly. It is this obsessive behavior gave people an impression that he was a ‘crackpot’. It could also have led to his mental decline in his later years.In his days of invention, Tesla came up with some astonishing ideas and devices. Often he was misunderstood by the rest of the scientific community, as is ideas were so far out from anything that they understood themselves. Tesla made claims that he could transfer energy around the globe without the use of wires, and that the energy its self could be obtained freely from the environment without the need for fuel. These ideas made him unpopular with the establishment, as such devices would reduce their political power and overall wealth. It is only more recently that some of this work is being taken seriously. There is much conspiracy theory around these subjects, but it will not be discussed here. You can learn more about the science involved by going to the physics section of this site. It is also recommended that you do further reading on Nikola Tesla if you are interested in this subject.

Nikola Tesla’s invention of AC electricity is what is used to power homes today yet many people connect the name Edison with electricity’s origins. Both Tesla and Edison were competing with each other for the promotion of their ideas as the best technology. Edison was trying to promote DC electricity as the best way to power homes and went to some extreme lengths in an attempt to discredit Tesla’s work in order to make his own appear superior. The video shown below was filmed in 1903 when Edison electrocuted to death an elephant as a cruel stunt to try to show the danger of AC electricity.

The fact is that Tesla’s AC electricity is actually safer in many ways. Edison just made the current very large. Such large currents would kill regardless of AC or DC. Most of us learned about Edison at school but rarely is it mentioned what a cruel and dishonerable man he was. Tesla sought to make the world better for all, Edison sought wealth and power. Unfortunately money usually wins more power to change things than good will does.

How to Make a Tesla Coil

The photo on the left shows electrical discharge through a small flame on the top sphere of a homemade, battery powered Tesla Coil. The aim of this design was to get the highest voltage (or longest arcs) possible from a singe self contained unit. This coil operates from 12V or 24V SLA batteries. A pair of car ignition coils are used to provide around 20kV for charging the capacitor bank. The ignition coils are driven by a variable frequency square wave from a 555 timing chip and four large transistors (2N3055).