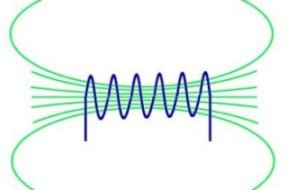 A wire coil can be used to concentrate magnetic flux in a controlled area. The most common form of coil, known as a solenoid, can be a single loop of wire or multiple turns in series. The diagram on the left represents the magnetic field in a typical solenoid.

By winding multiple turns in the same direction its possible to increase the total magnetic field strength. A typical solenoid posses a property known as inductance which creates a resistance to the change of flow of current in the wire. 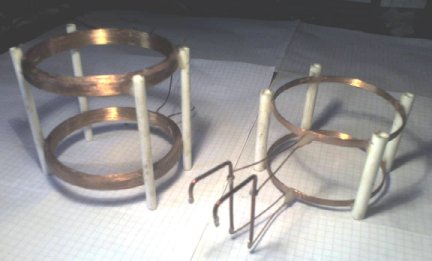 This type of coil is used to generate a uniform magnetic field. Two coils are held parallel to each other at a distance less than their diameter . The field between the coils should be quite uniform, providing the strength of the overall field is high enough.

Helmholtz coils are commonly used for scientific tests which require controlled field conditions. They can be used for canceling the earths magnetic field or for testing the effectiveness of magnetic shielding for example.

They are also useful for measuring the magnetic properties of materials. 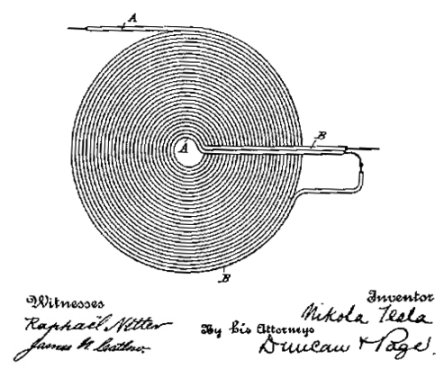 This type of coil, when powered does not create an external magnetic field. Its construction is similar to that of a normal solenoid, but each turn of the coil carries the current in opposite directions. The opposing currents create an overall canceling effect, thus no major external field is produced. A bifilar coil will produce almost no inductance to a changing, or AC current. This makes them useful for creating non-inductive wire wound resistors.

Scalar theory suggests that this type of coil produces ‘Scalar Waves‘, but the standard model of physics does not accept scalar waves as a valid theory. Bifilar coils are often mentioned along side so called Over unity, or free energy devices.

This is because the vacuum fluctuations, or ‘Zero Point Energy‘ are like canceled vibrations with a massive energy density, and are seen as scalar waves by some. Standard scientific theory tells us that the entropy (disorder) of a closed system always increases and therefore no useful energy could be extracted from the vacuum.

The image above show a patent by Nikola Tesla for a type of bifilar coil. In this configuration the two wires are wound the same way and then connected in series so that the current flows in the same direction. This allows the magnetic field to combine to produce a larger overall field.

These are simply solenoids, or Helmholtz coils arranged to point in all three dimensions. They are also used for scientific tests or experiments involving controlled field conditions. Some theoretical teleportation experiments mention the use of XYZ coils for creating some kind of ‘fourth dimensional’ field When this field is coupled to an object and then driven at some fundamental resonant frequency, the object could be made to move in the fourth dimension. An observer would see the object disappear and then re-appear in a different location.

A Penning trap is a set of electromagnets or coils that will create a controlled non-uniform magnetic field. The diagram on the left shows how the magnetic field is slightly less intense in the centre of the trap. This ‘bubble’ in the field lines is where anon neutral plasma can be contained. A non neutral plasma is simply a plasma that has an overall positive or negative charge, such as a collection of electrons. A charged ‘particle’ such as an electron would require an accelerating force to move it across the magnetic field lines. Without this external force the electrons in a penning trap will tend to spiral back and forth within the area of weakest field. The converging field lines at each end act like a ‘magnetic mirror’ allowing the plasma to remain contained.