ZPE is the energy that exists as particle-antiparticle pairs or scalar waves, throughout the vacuum of space. It is often refereed to as a ‘foam’ of sub-atomic particles popping in and out of existence. This energy has a high entropy (disorder) which is what prevents it from being made useful by conventional means. Accepted theoretical models say that this random state of fluctuations can not be cohered (brought together) due to the laws of thermodynamics and the phenomenon of coherent states.

Dutch physicist Hendrik B. G. Casimir discovered that two uncharged parallel metal (or dielectric) plates would be forced together when separated by a distance of a few atoms diameter.

This effect, known as the Casimir effect, is caused by a difference in the level of vacuum fluctuations, between the plates, and on the outside of the plates. The tiny space between the plates limits the range frequencies of ZPE that can appear. This means that the energy density is less between the plates than outside them, therefore they are forced together. Two pieces of Mica were separated by 14 Angstroms (~ five atoms) and produced a force equivalent to 10 tons per square meter.

This is strong evidence for the presence of zero point energy, but it is not coherence. We can not extract useful energy from this force, just as we can’t extract energy from permanent magnets.

In physics, the zero-point energy is the lowest possible energy that a quantum mechanical physical system may possess; it is the energy of the ground state of the system. All quantum mechanical systems have zero probability of finding system at zero energy, thus the energy of the lowest state is not equal to zero (thus this energy is called zero point energy). The term can be explained on the example of simplest quantum system – oscillator (quantum harmonic oscillator). In quantum field theory, it is a synonym for the vacuum energy, an amount of energy associated with the vacuum of empty space. – energy of virtual particles. In cosmology, the vacuum energy is taken to be the origin of the cosmological constant. Experimentally, the zero-point energy of the vacuum leads directly to the Casimir effect, and is directly observable and measurable in nanoscale devices made of conductors.

The concept of zero-point energy, and the hint of a possibility of extracting “free energy” from the vacuum, has attracted the attention of amateur inventors, despite that quantum mechanics explicitly prohibits transitions from lowest state to any lower state (because there is none). As of 2006, there is no known practical method to extract usable energy from the vacuum, although mainstream research is being carried out by the Calphysics Institute, NASA’s Glenn Research Center, and aerospace giant BAE Systems.

In classical physics, the energy of a system is relative, and is defined only in relation to some given state. Typically, one might associate a motionless system with zero energy, although doing so is purely arbitrary. There is no absolute way to state the energy of a classical system.

The origin of a minimal energy that isn’t zero can be intuitively understood in terms of the Heisenberg uncertainty principle. This principle states that the position and the momentum of a quantum mechanical particle cannot both be known arbitrarily accurately. If the particle is confined to a potential well, then its position is at least partly known: it must be within the well. Thus, one may deduce that within the well, the particle cannot have zero momentum, as otherwise the uncertainty principle would be violated. It is well known that the energy of a moving particle is proportional to the square of its momentum: this is the kinetic energy of the particle. Thus, we deduce that the kinetic energy of the particle cannot be zero without violating the uncertainty principle, and so have a simple, intuitive picture of the zero-point energy: it is the vibration of a trapped particle, a vibration that cannot be removed. 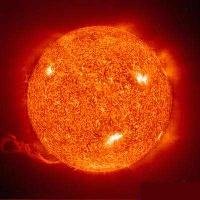 In cosmology, the zero-point energy offers an intriguing possibility for explaining the speculative positive values of the proposed cosmological constant. In brief, if the energy is “really there”, then it should exert a gravitational force. In general relativity, mass and energy are equivalent; either produce a gravitational field.

One obvious difficulty with this association is that the zero-point energy of the vacuum is absurdly large. Naively, it is infinite, but one must argue that new physics takes over at the Planck scale, and so its growth is cut off at that point. Even so, what remains is so large that it would visibly bend space, and thus, there seems to be a contradiction. There is no easy way out, and reconciling the seemingly huge zero-point energy of space with the observed zero or small cosmological constant has become one of the important problems in theoretical physics, and has become a criterion by which to judge a candidate Theory of Everything.

A uniformly accelerating observer will observe zero-point energy of the electromagnetic field as a thermal bath of real photons, in an effect known as the Unruh effect.

Rueda and Haisch (1994, 1998a, 1998b) have proposed that the zero-point fields can have a drag on an accelerated observer, the drag being interpreted as the inertial mass of the accelerated object, and thus explaining the origin of mass. This approach also sheds light on Einstein’s Principle of Equivalence (Rueda and Haisch 2005). Numerous published papers on this topic are archived at the Calphysics website.

Vacuum energy has a number of consequences. For one, vacuum fluctuations are always created as particle/antiparticle pairs. The creation of these “virtual particles” near the event horizon of a black hole has been hypothesized by physicist Stephen Hawking to be a mechanism for the eventual “evaporation” of black holes. The net energy of the universe remains zero so long as the particle pairs annihilate each other within Planck time. If one of the pair is pulled into the black hole before this, then the other particle becomes “real” and energy/mass is essentially radiated into space from the black hole. This loss is cumulative and could result in the black hole’s disappearance over time. The time required is dependent on the mass of the black hole, but could be on the order of 10100 years for large solar-mass black holes.

The Grand unification theory predicts a non-zero cosmological constant from the energy of vacuum fluctuations. Examining normal physical processes with knowledge of these field phenomena can lead to an interesting insight in electrodynamics. During discussions of perpetual motion, the topic of vacuum energy usually encourages serious inquiries.
^ Info from Wikipedia ^

Over Unity and Free Energy Devices

A standard transformer is about 96% efficient and therefore 4% under unity. this means that 4% of the energy passing through the transformer will be lost. Losses are unavoidable and are usually due to heating or vibrations.

The term Over Unity or Overunity, is often used to describe devices or systems which will produce more energy than is required to run them (free energy machines). Real over unity is simply not possible. It actually makes no sense “Over Unity” is equivalent to “More than the same” which is impossible. If a device were to output more electrical power on it outputs than was supplied to its inputs, it must have another power source. In the case of the so called ‘Over unity’ devices this extra energy on the output is said to come from the vacuum fluctuations (a.k.a. zero point energy).

v Info from Wikipedia v
The Casimir effect has established zero point energy as an uncontroversial and scientifically accepted phenomenon. However, due to lack of education of laymen in quantum mechanics, the term zero point energy has also become associated with a highly controversial area of human endeavour – the design and invention of so-called free energy devices, similar to perpetual motion machines in the past. These devices purport to “tap” the zero-point field and somehow “extract energy” from it, thus providing an “inexhaustible”, cheap, and non-polluting energy source.

Controversy arises when such devices are promoted as being revolutionary, but without scientifically acceptable proof that they tap the energy sources claimed. Promoters of a device demonstrate no understanding of how the device might do so; they demonstrate misunderstanding of widely-accepted scientific facts and methods, in development or communication of a theory concerning a device; they make no attempt to exclude prosaic explanations for claimed performance of a device.

Any of these behaviours are liable to taint the reputation of those involved with such devices, and qualified researchers are therefore likely to be reluctant to make any attempt to verify or to even seriously debunk such a device, until the promotors of the device demonstrate competence-enough to be taken seriously. An exercise for the skeptical reader might be to provide a list of controversial free energy devices where none of these situations are the case.
^ Info from Wikipedia ^

Next Page: A Theory Of Everything
Previous Page: Can dimensions be limited, or is the universe really infinite?