The Theory of Everything
(The Standard Model of Physics)

Not so long ago we saw the universe as particles moving in space, then ‘String theory’ was introduced to better explain the organization of the universe, but more recently this has evolved into ‘M theory’.

In standard particle physics, particles are thought to be points moving through space, tracing out a line known as the ‘World Line‘. For the different interactions that we see in nature to occur there must be more possible degrees of freedom (dimensions) for a particle to move in than just their position and velocity. Such dimensions could be mass, electric charge or spin. The standard model of the universe was designed around Quantum Field Theory (QFT), which allows theories to be developed and be consistent with quantum mechanics and special relativity.These theories successfully described three of the four known interactions in nature (Electromagnetism, Strong and Weak nuclear force). They also described the interaction between electromagnetism and weak nuclear force (Electroweak Theory). The fourth interaction (Gravity), which is described in Einsteins theory of General Relitivity does not seem to fit. When the rules of QTF are applied to general relativity the results seen are impossible. For example; the force between two gravitons would be infinite, which can’t happen. 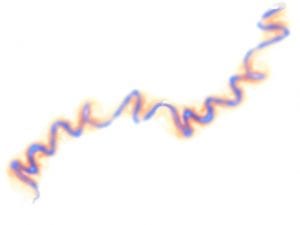 String Theory replaces the range of different particles with a single fundamental building block. This is known as a ‘string’. These strings can be open ended or ‘tied at the ends’ forming a loop or ring. As a string moves through time it traces out a sheet or a tube, depending on which type of string it is. Strings can vibrate freely. Different vibrations create the different particle types. For example; one vibrational mode makes a string appear as an electron, another could make a photon, even a graviton. String theory received a lot of attention because it could describe the interaction of two gravitons, whereas the previous theories could not. String theory also has the necessary dimensions to describe other interactions. This gave hope for a new theory which would unify all particles and forces, ‘The Theory of Everything’

The known subatomic particles are classified depending upon the way in which they spin. The two types are called Bosons and Fermions. Bosons carry forces, and fermions make up the matter of which we are made. Originally String Theory did not describe Fermions, only Bosons. This meant matter particles were not included. To obtain a theory which includes both Fermions and Bosons, Supersymmetry was used and this gave us Superstring theory. The problem with this is that five different theories developed and only three of them had no mathematical inconsistencies. For two of the theories the fundamental object is a closed string, while in another, open strings are used. Two more theorys were developed by mixing the best parts of Bosonic strings and Superstrings, these are Heterotic String Theories. Studying these theories was problematic, as we did not have all the necessary tools to test all possible values of the parameters involved.
We are all used to the idea of three dimensions (3D), but time is also a dimension. This makes four dimensions that we can perceive. String Theory predicts that space-time has ten dimensions, not four. It is thought that the ‘extra’ dimensions are tightly packed on complex shapes known as Orbifolds and Calabi-Yau Manifolds. These dimensions, or degrees of freedom are such things as charge on an electron. It is believed that the charge arises because the electron is moving in one of these other dimensions.

Recently techniques have been developed to thoroughly explore the theories. This led to the development of M-Theory. This theory describes the previous five theories of superstrings as just different aspects of the same theory. M-Theory seems to tell us that there is another dimension, bringing the total to eleven. It is said that M-Theory should be seen as an eleven dimensional theory that looks ten dimensional at some of the points in its parameters. Now this gave us a new fundamental object, Branes (membranes). These Branes look like strings if the eleventh dimension is curls into a small circle (like looking at a tube from the end).