Can dimensions be limited, or is the universe really infinite?

From our point of view, the universe seems to be infinite, and it seems that it’s not only infinite but even ever expanding. Now that you should be able to understand how our seemingly 3D space time universe can all fit in a 4D hypersphere, which in turn can fit on a surface of a 5D hypershere and so on, where a difference in time is equivalent to a different point within its volume, you can understand why the universe as seen by a 3D observing creature/mind has no limits. 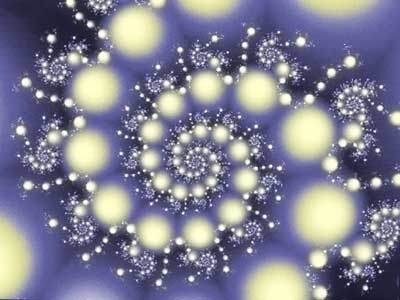 Just imagine one of those 2D creatures who cannot understand what is height in the z direction and put him on the surface of a sphere. He would walk round and round searching for an edge for ever, and finally he may conclude and even prove that the path is infinite. Same applies to a 1D creature going round a simple circle, and therefore same applies to us 3D creatures living and travelling around in a 4D universe! In general we can say that a creature with n x D observation capability, will observe an (n+1)D dimension universe as infinite. We also learn that for an n x D observer, the only way to observe a universe of a higher dimension than himself is to ‘walk around it’ and memorise.

The question is, how can we know how many dimensions is the universe made up from. All the arguments mentioned above can be applied to any dimension and would imply the possibility of an infinite dimension space. But mathematics shows us that there are yet unknown reasons for which an ultimate dimension may be reached. One very interesting curve is the plot of surface area of hyperspheres of different dimensions, shown below. One would easily think that as we go higher in dimensions, the surface area of the n-sphere would increase at each stage, and yet, something very strange occurs, as a maxima in its surface area is reached at the 7th dimension. Could this indicate the real ultimate dimension of the universe?

What would an n x D observer see if the universe in which he lives in is his own n x D dimensions ? – the answer is ‘a still, or static (frozen in time) spatial shape of n x D dimensions’. A 2D creature does not need to move around the circle to recognise it or know anything else about it, and a 3D creature does not have to flow through circular slices of a sphere to recognise a sphere. Note that the actions move and flow both require the time dimension to make sense, but recognise is an act that reacts to the shape of a static structure and needs no time. For an n x D observer, the n-dimensional universe is static, lifeless, and does not change through time, but has all the knowledge of what’s within all lower dimensions. Let’s name this ultimate n x D observer as the universal observer. For the universal observer, time does not exist, since both himself and the universe are the same thing and neither himself nor the universe is effected by time in lower dimensions, and from a lower dimensional observer point of view he can be said to be existing from eternity to eternity.

Next Page: Zero Point Energy & Over Unity
Previous Page: What’s the evidence for the existence of higher dimensions?