DANGER: This project involves creating a mixture of Hydrogen and Oxygen which is a highly EXPLOSIVE GAS. When contained in a confined space, detonation of the gas would be highly dangerous and could cause serious injury.

How it works
Water is a compound made from the two elements of Hydrogen and Oxygen. It has the chemical symbol H2O which indicates that each molecule is a combination of one Oxygen atom and two Hydrogen atoms.

All atoms can form ‘ions’. These are just the same atom except with a little extra charge. Atoms can become ionized when in the presence an electric field. You can see extreme examples of this in the DIY Tesla Coil project. Hydrogen forms positive ions, and oxygen forms negative ions. We use this to our advantage by using an electric field to pull the water molecules apart.

By placing two electrodes (metal plates) into water we can create an electric field between them by connecting them to the terminals of a battery or power supply. The positive electrode is known as the anode, while the negative one is the cathode. Pure water actually does not conduct electricity so it is not suitable to be used without adding something to the water. Tap water already contains many dissolved compounds which allow the water to conduct. The ions formed in the water will be attracted to the electrode of opposite polarity, i.e. the positive hydrogen ions will move towards the cathode, while the negative oxygen ions move to the anode. Once the ions reach the surface of the electrodes the charges will be neutralised by adding or removing electrons. The gas is then fee to bubble up out of the remaining water to be collected.

The electrodes are typically made from metal or graphite (carbon) so that they can pass electricity into the water. It is important that the chosen material does not react readily with oxygen or one of the dissolved compounds otherwise reactions will occur at the surface of the cathode (negative electrode) and the water will become polluted with the products of the reactions. You will see an example of this below when copper electrodes are used. This also means that no or very little oxygen gas is released as it gets combined with the metal electrode and remains in the container.

This is a simple project that is used to create Hydrogen and Oxygen gas by electrolysis of water. The aim was to get good gas production rates without using extra chemicals or eroding the electrodes.

The first electrodes tried were ones left over from a different project. They were made from Copper coated Carbon rods which are not ideal due to copper being able to react with the water. The idea was that the copper would eventually all react away and there would be just Carbon left which would not pollute the water.

The copper seemed to take too long to react away and it was decided that this would not be useful at all. Below you can see the result of using copper electrode for electrolysis. The blue sludge floating on the surface of the water is some reactant of the copper and tap water.

Many people use electrodes made from stainless steel kitchen ware or switch plates because the stainless steel does not react as easily. The problem is that the grade of the steel often found in such items is not great and you will be left with a brown sludge after a few minuets of operation. They are also quite thin, usually less than 1mm, which means that the do not last a very long time before being totally eroded away. The erosion of the electrodes happens much more quickly when high currents or solutes (often called catalysts) are used.

The volume of gas produced is proportional to the charge passing through the water (current) and therefore high current means more gas. To do this the spacing of the electrodes must be as close as possible while still having enough room for the gas to bubble out freely.

The metal chosen for the plates was special high grade stainless steel to reduce corrosion. Such metal is not as conductive as others like copper for instance, so these plates were made from thick sheets of 2mm to counter this potential limiting factor. Very high quality metal was used which meant it was too hard to cut with common DIY tools so these plates were cut using a high pressure water jet.

INFORMATION: Even the highest grade stainless steel will have some reaction with water and can produce toxic chemicals. Avoid touching the water after use. 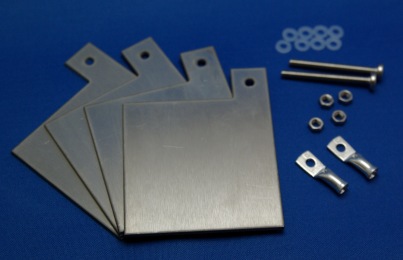 The plates are layered on top of each other with nylon washers between used as spacing. They are placed in alternating positions so that the plates would be +-+-+-. Stainless steel fixings were then used to fit it all together. It is important that it is put together well otherwise sparks could occur in the gas production area resulting in an explosion. 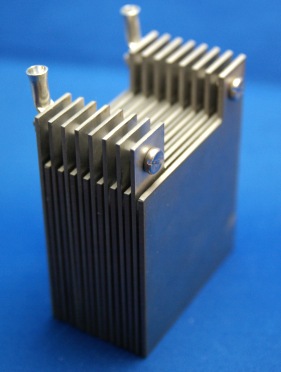 A total of 16 plates were used in with 1mm spacing between each of them. The large combined surface area and thickness of the plates and bolts meant that this could carry very large currents without significant resistive heating in the metal. The total capacitance of the electrodes was 1nF when measured in air which indicates a large close surface area for gas production. This set of electrodes would draw about 25A from ordinary tap water. To collect the gas, the electrodes need to be placed in some sort of container. The container used was just something from a supermarket and was originally intended for storing something like tea!

This video shows the result of applying 12V to the electrodes when submerged in ordinary tap water. No ‘catalysts’ have been added to the water at all, this is just tap water!

It is drawing about 25A. Power to the cell is controlled using a pulse width modulation circuit. 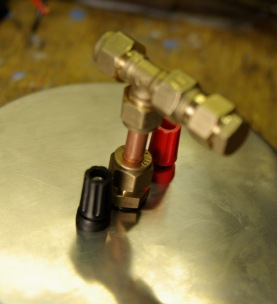 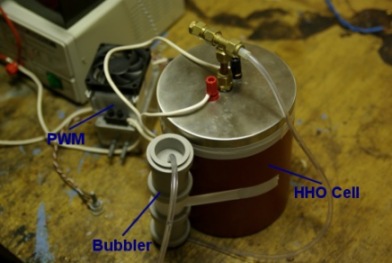 The container was made from metal so it was important to place the electrodes on a plastic base to prevent any short circuits. This image shows how two banana sockets were installed either side of some copper and brass fittings used to extract the gas. The power and pipe fittings were screwed tightly and sealed with silicon sealant so that the closed container would be air tight.

The gas produced is a highly explosive mixture of Hydrogen and Oxygen and should be treated with extreme caution. A large volume of gas exists inside the container which if ignited would explode and destroy the container. To avoid detonating the gas, the pipe from the container is fed into the base of another container which is half filled with water. This allows the gas to bubble trough the water to then be collected via another pipe which is used as the gas output. Now if any ignition occurs at the output, the flames can’t get back past the bubbler device and into the large gas volume in the electrolysis cell. This is an absolutely essential safety device and should not be skipped.

Now it is just deciding what to do with the gas! A good way to see the how explosive the gas mixture is to bubble the gas through another container of water such as a mug and ignite the bubbles as they reach the surface. Each bubble will explode very loudly and probably blow out the lighter.

A similar project which uses the explosive properties of the gas is the Hydrogen Cannon experiment.

You should be aware that detonating this HHO gas mixture is VERY VERY loud.