Electric forces act between charged particles or objects. The force is dependent on the amount of charge and the distance between them. Normal matter is often considered to be made from sub atomic (smaller than atoms) particles known as protons, electrons and neutrons. Each particle is said to carry a finite amount of charge. A proton carries a positive charge, an electron carries negative charge, and a neutron carries no charge. The images below are a common way of representing an electric field. The circles with a + or – inside represent charged particles or objects, and the lines are used to represent the field. The closer the lines are to each other, the stronger the electric field. 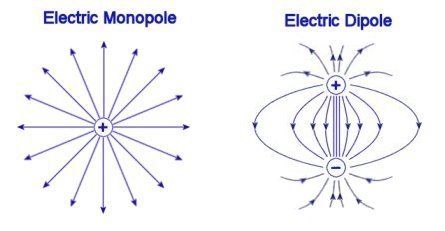 These diagrams give the impression that subatomic particles are like tiny spheres with an exact size. This is not exactly true, but is often easier to treat them as such for simple experiments. An electron is actually more like a fuzzy cloud as it does not really have an exact position. We can never determine the exact location of an electron and this is known as heisenberg’s uncertainty principle. This also explains why the ‘orbiting’ electrons around an atoms positive nucleus don’t come crashing down.

A macroscopic object, such as a metal ball is normally electrically neutral (it contains equal amounts of evenly distributed protons and electrons, i.e., has no net charge). For the object to become charged it must have an excess of either protons or electrons. The difference in the amount of potential energy between the points of a dipole is known as the ‘potential difference’ and is measured in Volts (V). In a solid conductor such as metal, the atoms are fixed in place relative to each other. Some of the outer shell (valence) electrons are free to move between the atoms. If the metal is placed in an electric field, the free electrons will migrate towards the positive end of the field. This movement of charge is known as a current flow and is measured in Amps (I). This current flow gives rise to a magnetic field, which acts perpendicular to the direction of current flow.