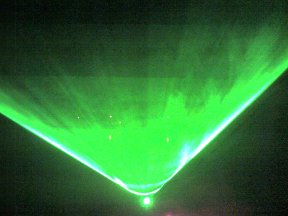 When light passes through a substance such as glass, it is often said to slow down upon entering the glass, and then speed up as it exits. This isn’t exactly true. When an EM wave hits an atom it is absorbed, and the electrons are exited to a higher energy state. The wave is then re-emitted as the electrons fall to a lower state again. The re-emitted photon, or wavelets, phase is slightly behind, relative to the original. This process happens many times over as the wave is passed between the atoms of a material, and has the overall effect of slowing the propagation of the wave. If the incoming wave is vibrating at a similar, but not identical frequency to the atoms natural resonant frequency then the phase shift will be larger.

The majority of materials will retard (slow) the propagation of the wavefront, but plasmas can accelerate it. The wave its self only ever travels at the speed of light (c = 299,792,458 m/s), but the phase velocity can be greater or slower than c.