There are several ways to demonstrate the motion of a vortex. The most simple method would be the popular vortex in a bottle type. This can be made by sticking two plastic bottles end to end by their lids. With a hole through the adjoining lids water can be made to pass from one bottle to the other, under the influence of gravity. A simple swirl of the bottle is enough to make the water spin and accelerate to form a vortex. 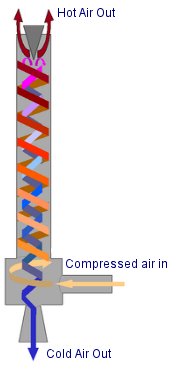 A vortex tube is a method commonly used for cooling. By forcing compressed air into the device vortices will form which allow hot air to exit from one end whilst the cold dense air exits the other end.

Info from Wikipedia
The vortex tube, also known as the Ranque-Hilsch vortex tube, is a heat pump with no moving parts. Pressurized gas is injected into a specially designed chamber. The chamber’s internal shape, combined with the pressure, accelerates the gas to a high rate of rotation (over 1,000,000 rpm). The gas is split into two streams, one giving kinetic energy to the other, and resulting in separate flows of hot and cold gases.

The vortex tube was invented in 1930 by French physicist Georges J. Ranque. German physicist Rudolf Hilsch improved the design and published a widely read paper in 1945 on the device, which he called a Wirbelröhre (literally, vortex tube).

Vortex tubes have lower efficiency than traditional air conditioning equipment. They are commonly used for inexpensive spot cooling, when compressed air is available. Commercial models are designed for industrial applications to produce a temperature drop of about 80 °F (45 °C).

Dave Williams, of Engineers Without Borders, has proposed using vortex tubes to make ice in third-world countries. Although the technique is inefficient, Williams hopes it could yield helpful results in areas where using electricity to create ice is really not an option.

A plasma vortex can be made through the interaction of electric and magnetic fields. A simple setup in a homemade vacuum chamber allows a plasma column to form within the magnetic field of a pair of rare earth magnets. The plasma column will rotate around the magnets in a direction which depends upon the polarity of the fields.