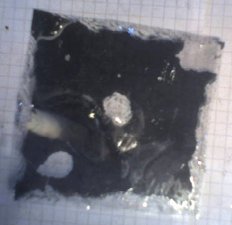 The reflective film used to make one way windows can react quite violently to high DC voltages. The image on the left shows a piece of window film after being exposed to around 30kV from a low current voltage multiplier.

The film is composed of a plastic sheet coated with a fine layer of metal on one side. When placed plastic side down on the top of a voltage multiplier or Van de Graffe generator, it will act in a similar way to a capacitor. If a grounded electrode is placed near to the metal surface the effectiveness of the ‘capacitor’ will increase dramatically until the dielectric material breaks down, or the air breaks down allowing an arc to pass over the the surface of the plastic layer.

When this breakdown occurs the silver material and some of the dielectric are blasted into the air, leaving full transparent patches on the foil. When the film is removed from the HV power supply, it can retain a reasonable charge. The charge can be randomly distributed around the surface and you may still get a zap from a pieces that seem to have been discharged. The best way to tell if a piece is still charged, is to see if is sticks to things. A highly charged piece will be strongly attracted to other surfaces. 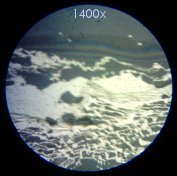 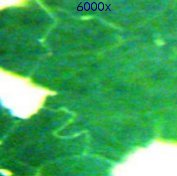 The images above show a microscopic view of the film after it has been violently discharged. The dark material is the metal, and the light is just the remaining plastic. At the top of the left image is the bulk of the metal. Under higher magnification we can see that this area also contains very fine fractures, as shown on the right