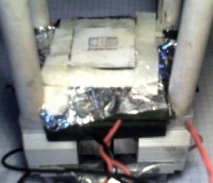 The aim of this project was to create a simple device capable of keeping components as cool as possible using common parts and materials. The device shown here is capable of maintaining a temperature of approximately -50° C.

The image on the left shows the exposed surface of a peltier heat pump which normaly sits under a well insulated containter with a metal base.

A selection of peltier heat pumps are stacked on a large heatsink (with fan) and surrounded by insulating material, except for the cold face. Using the thermoelectric effect of the Peltier elements, heat can be rapidly drawn away from this surface, but only as long as the heatsink is able to dissipate into she surrounding air. A large heatsink and fan can be found in computer shops as they are necessary for keeping your computers processor cool.

Simply sticking a component to the surface of the heat pump will provide quite effective cooling, but only if there is a large amount of contacting surface area. For more rounded or uneven shaped components, such as laser diodes, it is possible to use a very cold liquid to surround the device. This liquid must be able to withstand very low temperatures without freezing, and be highly volatile (evaporates easily). Something like liquid Nitrogen or Helium would be great, but that’s not something you can just pick up from your local hardware store. This projects uses ‘Freezer Spray’ which can usually be found in shops selling plumbing accessories. This spray evaporates rapidly on contact with room temperature objects drawing the heat way from it. By slowly spraying the Freezer Spray into a small container such as its lid, it is possible to collect it as a liquid. The liquid can be put in a small metal container which sits on the surface of the cold heat pump. This metal container is also surrounded in insulating material such as polystyrene.

When the heat pumps and fan are active it should be possible to prevent the liquid from evaporating, allowing components to be submerged for cooling.

Most peltier heat pumps / thermoelectric modules require some odd non standard DC voltage (8.4 for example). While such a device would work fine on a lower voltage you would not be getting the full cooling potential of the peltier element. A good way to power these devices is by using pulse width modulation so that you can adjust precisely the average power flowing through the device. Our power pulse modulator makes an ideal power supply for peltier modules.