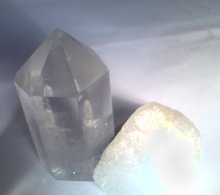 There are many forms of electric minerals. Charge separation between opposite faces of a crystal occurs when it is stressed. This is due to the regular atomic structure within the crystal. The effect also works in reverse, therefore applying a potential difference to the opposing faces will cause the crystal to expand or contract, depending upon the polarity.

The most commonly known piezoelectric material is Quartz (SiO2). Many other important minerals are often found within quartz deposits. Tiny pieces of quartz are used in watches, clocks and radio transceivers to provide a stable and precise frequency for the circuitry. Piezoelectric lighters use a spring loaded hammer to strike a small crystal which will produce a high voltage spark. 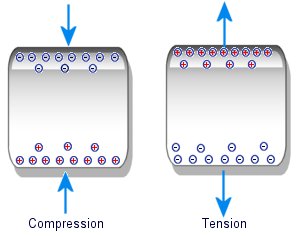 The diagram on the right shows how some of the charge becomes separated in a piezoelectric material when stressed. The effect of applying a voltage to deform the crystal is not always parallel like shown here. The effect depends on the crystal structure and sometimes the deformation can sheer or be at different angles compared to the electric field. 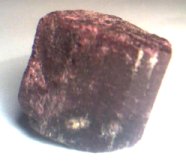 The pyroelectric effect occurs in certain materials when they are uniformly heated or cooled. This effect is directly related to the piezoelectric effect, as the charge separation occurs when the material expands or contracts due to a change in temperature. This effect is non reversible, therefore applying a potential difference to the material will not cause it to change temperature significantly.

Tourmaline is a mineral made from a mixture of substances (Na(Mg,Fe,Li,Al,Mn)3Al6(BO3)3O18(OH,F)4). It is a naturally occurring mineral, which can generate an electric field when it is heated or cooled. Natural crystal formations of Tourmaline can show a variety of colours and forms. Red Tourmaline was discovered to hold electric properties when ash particles were attracted and repelled by pieces in a fire.

The Thermoelectric effect is used to generate a low voltage rather than a high voltage, as many stages would be required, making it impractical. This effect occurs when the junction of two dissimilar materials is heated. This arrangement is often referred to as a Thermocouple. Using differently doped pieces of silicon it is possible to produce a device known as a Peltier heat pump.

This effect also works in reverse and is known as the Seebeck or Peltier effect. When a voltage is applied to the junction heat is ‘moved’ in one direction therefore cooling on side and heating the other.

This device allows heat to be moved electronically from one place to another, even against the temperature gradient (from cold to hot). Simply connecting a Peltier device to a DC voltage will cause one side to freeze, whilst the other side heats up. The effectiveness of the pump at moving the heat away from the cold side is totally dependent upon how well you can remove the heat from the hot side. This device can also be used to generate electricity if a temperature difference is maintained between the two sides.

This device utilises the cooling effect of peltier heat pumps in order to extract water from the air. The device was used in a damp basement and could collect about 500ml per day. The erratic wiring in the image make this device appear much more complex than it really is. There are a large number of wires because several different sized heat pumps were used, and each requires a different voltage. The six fans all ran from 12 volts. To provide the various voltages to the device a standard 500W ATX PC power supply was used. This type of PSU can be very useful for various experiments as they can provide a range of voltages simultaneously with a reasonable power output, and they are also overload protected.