A simple vibrating platform can be made from a piezoelectric sounder mounted on a plastic tube. The piezo sounder can be connected to a signal generator or even a PC sound card. By placing a small amount of powder or fluid on the sounder, various patterns and motions can be seen depending upon the applied frequencies. This system is known as Cymatics.

This image shows a pattern formed by a fine powder vibrating at a single, mid audio range frequency. Depending upon the size of your sounder and the materials used, the patterns will emerge at a range of frequencies.

Sometimes a pattern will only remain stable at one exact frequency, whereas other patterns will emerge over a broad range frequencies. By mixing signals together more complex patterns can be formed. If you don’t have signal generators handy try using classical music as it contains a great deal of harmonics and mathematical ratios within the sounds. Other types of music may work too, but the drum beats tend to destabilize the patterns.

We now have a fantastic Cymatics device available to buy with built in audio generator which is demonstrated in the video below.

Different materials will respond in different ways to the vibrations due to varying density or particle size and shape. Materials can also be separated or made to flow through each other. 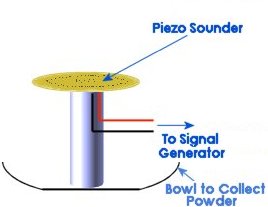 This diagram shows a flat Piezo sounder glued to the top of a small section of tubing for support. The connecting wires should be supported by attaching them to the tube. It is important that the wires are not tight as they may prevent the piezo sounder from oscillating fully. The wires can then be connected to an signal generator such as the DIY signal generator, power pulse modulator, or even a PC headphone output.

There should only be a pinch of powder such as salt placed on the sounder to see the effect. The sound should be adjusted whilst watching the surface to see how it responds. Make sure the sounder is as level as possible otherwise the powder will slide off before any patterns are formed.

You may notice that a certain frequencies the powder will jump into the air quite suddenly, destroying any patterns. This occurs due to resonance, and turning down the volume should allow you to form patterns at the resonant frequencies.

The projected images can look like 3D holograms, and it is often quite difficult to see how the projected pattern relates to the actual pattern on the reflective material.

You can make much larger versions of this project using a speaker with a flat playe replacing part of the cone. Details are shown in the comments section below. To drive a speaker you will need an amplifier to give a good supply of power to the speaker. An alternative is to use a high power signal generator such as a power pulse controller.

If the piezo transducer is driven at very high, or ultrasonic frequencies, and with a large amplitude it is possible to ‘atomize’ liquids such as water. This creates a fine mist that resembles steam in appearance. Such mists are actually tiny droplets suspended in the air yet they behave as if they were all part of a single dense fluid medium.