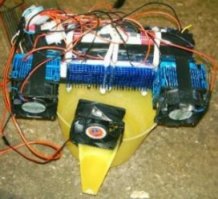 This device utilises the cooling effect of peltier heat pumps in order to extract water from the air. The device was used in a damp basement and could collect about 500ml per day. The erratic wiring in the image make this device appear much more complex than it really is. There are a large number of wires because several different sized heat pumps were used, and each requires a different voltage. The six fans all ran from 12 volts. To provide the various voltages to the device a standard 500W ATX PC power supply was used. This type of PSU can be very useful for various experiments as they can provide a range of voltages simultaneously with a reasonable power output, and they are also overload protected. An alternative to using the set voltages of an ATX PSU is to use a pulse width modulation circuit such as a power pulse modulator. This can be used to finely adjust the power to a peltier cooler so that it is operating at optimum levels. 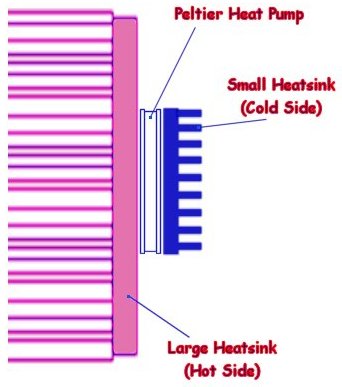 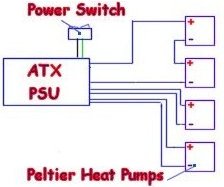 The device works by cooling the small blue heatsinks in the centre of the image. These are cooled to about 0 degrees Celsius (dependent on ambient temperature) which causes water to condense on the fins. When enough water has built up between the fins it will drip into the container below. The fan at the front simply keeps the air flowing over the cold fins, whereas the other fans are used to remove the heat from the heat pumps. In this image you can see a heat pump (peltier module) between the hot and cold heatsinks. Although this device is a useful demonstration of scientific principles, it is actually not incredibly practical or efficient.

This device is very easy to construct, and can collect a surprising amount of water for its small size. When a peltier module is attached to a DC source it will begin to move heat from one surface to the other. The side receiving the heat needs to be cooled using large heatsinks as the module itself will generate excess heat due to the current flowing in the device.