A kirlian photo is a photograph of electrical corona produced around objects under the influence of high voltages.

There are two common methods for producing kirlian photos. One is a little tricky, but the other method is quite simple if you have access to a few basic bits of equipment. You can see how to make a high voltage power supply supply on the DIY ignition coil driver page and others. If you are less familiar with building electronic circuits you can use our power pulse modulator to drive a hv spark coil as a high voltage source. The electrode plate can be made yourself or the easiest way is to use ITO coated glass.

We have a selection of specially made transparent electrodes for use as Kirlian Photo Plates which work great in this project. 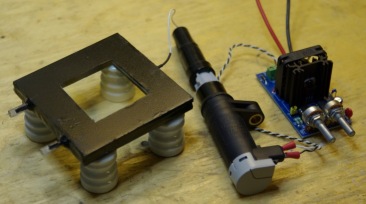 This method allows you to photograph or view electric field around object wit the naked eye. It works by creating a high voltage field between an object and a transparent electrode. The high voltage field causes ionisation of the air which is visible as a purple glow known as corona. The image above shows one of our Plasma Photo Plates resting on some high voltage insulators. You can use any insulator such as some plastic cups or glasses. Our electrode plates are provided with a filling syringe and caps so that it is easy to get started. Connected to the electrode plate is a high voltage spark coil which is being driven by our Power Pulse Modulator. The Power pulse modulator (PWM-OCXi) allows the high voltage coil to be driven with a variable frequency and power levels. This allows for different effects to be produced. At high frequencies, the plasma (or “aura”) tends to be softer and gives a smooth glow over most of the objects surface. At low frequencies the plasma tends to be longer and more jagged like lightning. It also tends to come mostly from the edges of the object rather than its surface.

First of all, the electrode plate must be filled with an electrically conductive solution. This is simply made by dissolving salt into ordinary tap water. You should add as much salt as will dissolve without making the water cloudy. Its is best to prepare the solution an hour before so that it has time to dissolve fully. 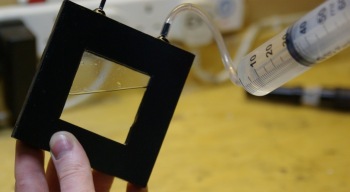 Connect the pipe to the end of the syringe provided and then draw some salt water into the syringe. (The amount needed will depend upon which size electrodes you have) Carefully put the other end of the pipe over one of the small plastic tubes on the edge of the electrode, tilt it as shown in the image and then slowly inject the solution into it. Make sure you go slowly to prevent leaks. Fill until a little solution comes out of the other plastic pipe, and then seal this with one of the caps. Remove the pipe and syringe and replace with the other cap. Wipe the electrode with a damp cloth and then make sure it is thoroughly dry and clean.

Take your sample such as a leaf or coin and tape it to the surface of the electrode as shown below. 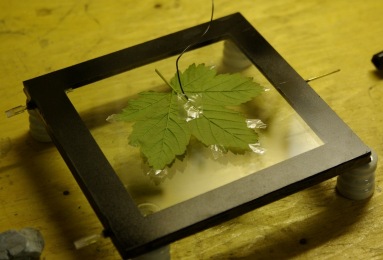 Tape a piece of wire to the back of the sample and connect the other end of this wire to ground. The ground connection should be the same as the ground or earth connection of your power supply. Turn the electrode over so that the sample sits underneath and place it on top of some insulators. You can use any non conductive object such as plastic cups or glasses. Connect the High voltage coil (or other HV power supply) to the metal connector on the electrode either directly as shown, or using a wire.

Connect all the other wires up so that it is ready to run. Familiarize your self with the layout as you will need to know where things are when you switch off the lights. 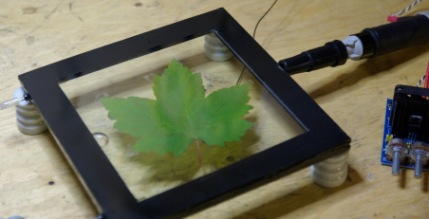 Turn the lights off and give your self a moment for your eyes to adjust to the darkness. Turn on the power and tune it to give the best possible image. 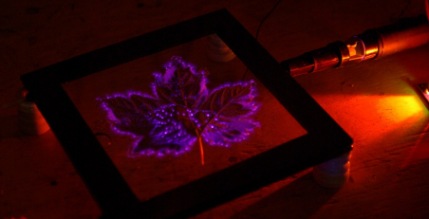 You should only have the power on for several seconds at a time. If it is on too long the sample could be burned or the high voltage could etch marks into the glass. Also if used at high power, the PWM-OCXI and coil will get hot so they will need to be allowed to cool. We recommend adding a push switch so that you just hold your finger on it to activate the device while taking a photo. You will need a camera with a good lens or high ISO setting so that it can take good pictures in the dark. Using different settings such as shutter time will allow you to get different quality photos.

You can also try an alternative setup using two or more electrode plates together as shown below. This allows you to add samples without having to stick them down or attach wires to them. It also allows for a wider range of effects. 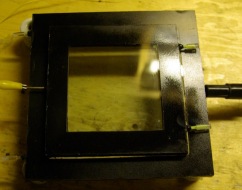 Here you can see one large plate at the bottom and a medium sized one on top. You can use any sized plates combined together but larger plate will need more power. The sample is placed between the two plates and the ground connection is made to the second plate. You can try having the grounded plate on top of the HV plate or visa-versa for different results.

This alternative method uses photographic plates or paper which can be expensive and hard to find. It can also be tricky to do correctly. The advantage though is that you can sometimes get images with various colours showing. The sample such as a leaf is placed directly onto the photographic plate. When exposed to high voltage the corona will effect the photosensitive chemicals in the photographic plate in different ways depending upon the intensity of the discharge.

This diagram shows how the sample to be photographed is placed on top of the photosensitive paper with an insulated metal plate below. The lower plate is connected to a high voltage source of several kV. While the sample is usually grounded for brighter results.

Obviously all this setup must be kept in the dark as to avoid exposing the photo paper to light. The power is usually switched on for around 30 seconds to get a good enough image.

If you don’t have photographic paper you could use the film from a polaroid camera. Polaroid cameras will eject a protective layer of card when you first insert a film. You can use this feature to develop your exposed film.

To make a kirlian photograph using polaroid film you should remove one film from the cartridge and expose your sample just as described above. After you have exposed the film, carefully place it back inside the film cartridge in the top position. Load the cartridge back into the polaroid camera and it will immediately eject the top film. When the film is ejected it passes between a pair of rollers which spread the developing chemicals over the image so that it is fixed and now safe to expose to the light.

Many people claim that this sort of photo is showing the “life force” or “aura” of living things. This is something many pseudoscientists are using as so they can sell you these sorts of cameras for thousands of dollars. This page should hopefully show you how simple they actually are and that it is just simple corona and ionisation effects that are being observed.

There are also claims of a “Phantom Leaf” experiment where a kirlian photo of a leaf with a piece cut away showed an image of the full leaf. Proponents of this idea claim that this “proves” that the “Life Force” lingers on after the original piece of leaf is removed.

The only legitimate reasons for any phantom images would be caused by water or etching on the surface of the glass plates of the equipment. Any claims of anything else are totally unfounded and such people should not be taken seriously. If you try moving the cut leaf to a different camera, or use new clean glass plates then no “phantom” effect is observed.

You can even take kirlian images of things like your finger tips or whole palm. There are people who claim that you can diagnose illness from the shape of the images produced. This is really outlandish any many people are taken in by these scammers. There are charts that even relate each finger tip image to a certain part of the body or emotional states. These claims are just pure fantasy, and are another method used to make money selling expensive cameras.

Some of these sites often use scientific terminology in all sorts of inaccurate ways and even list quotes of support from people who are apparently Doctors or experts in something. The fact is that there is no legitimate reproducible experiment that gives evidence to support any such claims. 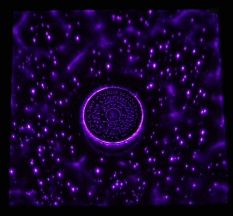 This kirlian photo shows a £2 coin between two of the electrode plates. The surrounding dots are caused by tiny amounts dust and dirt on the glass surface. 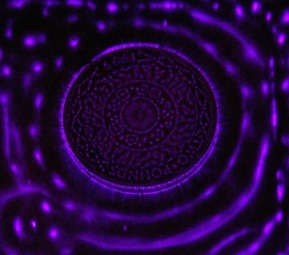 This kirlian photo shows a close view of the same coin and with a higher frequency supply. You can see rings or waves around the coin. 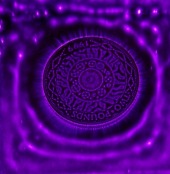 Another shot of the waves around the coin 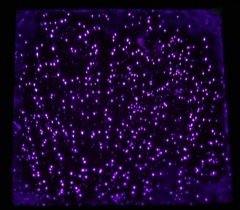 This is a photo taken when no sample is placed between the plates. All the little dots are probably dust although we had tried to clean the surface thoroughly.

Some of these dots would move around the electrodes due to electrostatic effects. 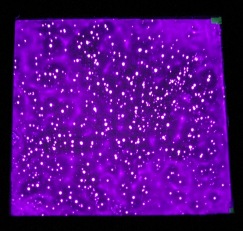 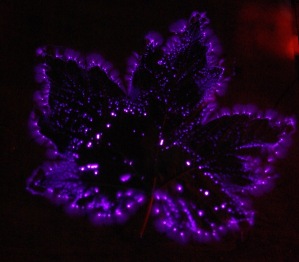 By adjusting the frequency while watching it, you can see the glowing corona move around different parts of the leaf. 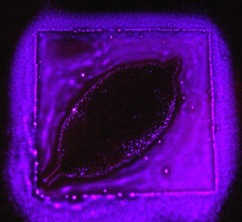 Another leaf image at high frequency. 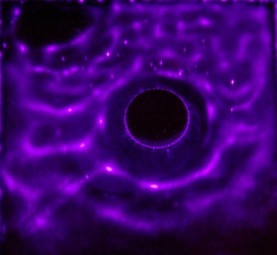 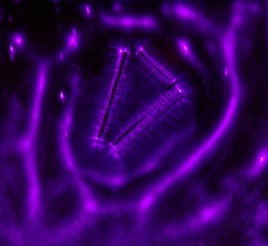 A bunch of little magnets. Notice the rings or waves again 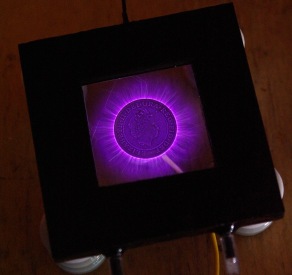 The £2 coin at low frequency under a single electrode.