Free Energy from the Environment

This is a simple setup that uses the thermoelectric / seebeck effect for converting heat directly into electricity with no moving parts. There are devices available called Peltier Heat Pumps which are used to keep electronic components cool. 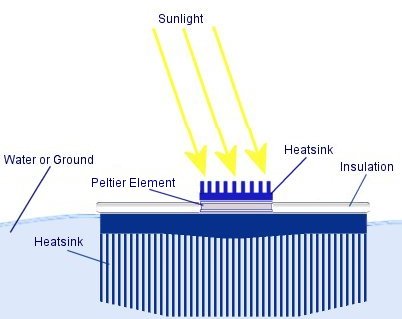 They are commonly used on processors as they can move heat away from a source under electrical power. When connected to a DC power supply a peltier element will heat up on one side whilst becoming cold on the opposite side. A large heatsink is necessary to dissipate the excess heat so that the other side can remain cold.

These peltier elements can also work in reverse. If it is heated on one side whilst being cooled on the other side a voltage will appear across the terminals. As long as there is a temperature difference between the two sides of the peltier device, then there will be a voltage between the electrical terminals.

Peltier heat pumps are not a very efficient method of generating electricity, but at least the supply of energy is free.

In a practical application a large heatsink could be buried in the ground to remove heat. If the peltier element is placed onto this is can be arranged to be heated on one side by the sun. A small black heatsink on the top of the peltier device could be used to collect heat from the sun that has been focused by a large mirror. Another method might be to use a larger heatsink and to place it inside a greenhouse. With this method it would be important to insulate between the hot and cold heatsinks so that the ground would not be heated directly.