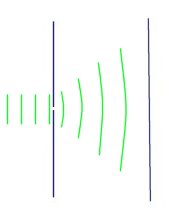 Diffraction is the phenomenon where waves can be bent around obstacles. When coherent light passes through a fine slit some of the rays are diffracted. The varying levels of diffraction cause part of the beam to interfere, thus producing an interference pattern.

Light from most sources is incoherent. This means that the many waves coming from the source do not line up with each other, or are not in phase. Common sources of light such as the sun or a light bulb emit photons at random intervals, but as there are so many overall we see it as just a constant source.

If the beam from a laser is shone through a fine slit, such as that between the edges of two razor blades, we can easily see how the waves are diffracted and produce interference. If the light from the slit is projected onto a paper screen we can observe and measure the patterns produced.

This phenomenon is related to Huygen’s Principle. This says that every point on a wave front acts as a source of tiny wavelets that move forward with the same speed as the wave. The wave front at a later instant is the surface that is tangent to the wavelets.

Refraction and the Spectrum

When light enters a denser medium is effectively slowed down. This is due to the light being repeatedly absorbed and re-emited by the atoms in the material. This slowing of the wavefront’s causes the beam to be bent at an angle dependent on the material and the wavelength (colour) of the light.

This image shows how white light is split into its component parts using a prism.