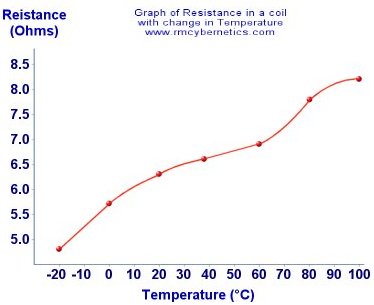 The temperature affects the dimensions of the conductor; a higher temperature causes an expansion in a material while a colder temperature causes a contraction. And with this expansion/contraction a change in resistance occurs as a thicker wire has less resistance to current flow than a thinner one. Materials used as conductors typically tend to increase their resistance with a temperature increase while insulators have the adverse effect. Materials used as insulators often only exhibit a drop in resistance at very high temperatures meaning they usually don’t encounter temperatures high enough though typical use. Because of this these changes cannot all be attributed to the change in dimensions. In fact the resistance change is mainly due to the temperature affecting the atomic structure of the material, causing a change in the resistivity of the material.

The effect heat has on an atomic scale is causing the atoms to vibrate, the higher the temperature, the more violent the vibration.

An insulator is different; the low number of free electrons means very little current can flow. Most of the electrons are tightly bound to their respective atom. Heating will still cause vibration; these vibrations however will cause significantly less collisions. If heated enough the vibrations may actually become violent enough to shake some electrons free, creating free electrons to carry a current. Therefore increasing the temperature of an insulator decreases the resistance.

This graph shows the measured resistance of a solenoid under varying temperatures.

Any normal conductor will see a drop in resistance with a drop in temperature. With a small range of temperatures like shown here the effect is almost linear. The wiggles in the graph are due to inaccurate data generated by the measurement process.

To demonstrate this you need a solenoid of at least several hundred turns, an ohm meter or multi meter, and some freezer spray.

The resistance of the solenoid used for this test was 6.3 Ohms at room temperature. To increase the temperature of the coil it can simply be connected to a battery and allowed to heat up. The temperature was measured using an infrared thermometer.

You could cool the solenoid in a standard freezer to about -20, but it would take a while so we used some freezer spray to get quicker results. The lowest resistance from our coil was just 4.8 Ohms whereas the highest was 8.2 Ohms.

Reducing the resistance of a coil means that a higher current can be drawn from the same source of EMF (volts). This means that the magnetic field it produces can be much stronger. When the temperature of a conductor drops below a certain level its resistance will suddenly drop to near zero. Under these conditions this is known as a superconductor. Superconducting electromagnets are used in MRI (Magnetic Resonance Imaging) machines so that ultra-strong magnetic fields can be produced. These usually have to be cooled with liquid nitrogen and require a lot of power.