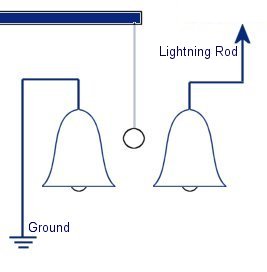 In 1752 Benjamin Franklin was experimenting with one of his inventions, the lightning rod. Using the setup shown on the left Franklin was able collect electrostatic charges from the wind above his house. No known images exist of the original setup used, but this is the most common method used to reproduce the effects he describes.

This electrostatic device was actually invented in 1742 by a German professor named Andrew Gordon. Gordon’s Bells were the first device that converted electrical energy into mechanical energy in the form of a repeating mechanical motion, opening the doors for a variety of modern technology, from security alarms to school bells.

Two metal bells are suspended on insulating (dielectric) supports. One bell is electrically connected to the earth and the other is connected to a lightning rod. A metallic ball is suspended between the bells by a dielectric thread. The lightning rod would allow charge to build up on the bell which would then attract the metallic ball. When the ball hits the first bell it will become charged to the same potential and therefore will be repelled again. Since the opposite bell is charged oppositely this will also attract the ball towards it. When the ball touches the second bell the charge is transferred and the process repeats.

This setup was used by Franklin to collect electric charge for use in other experiments. The amount of charge collected was sometimes so faint that after a spark between the bells it would take considerable time to charge up again. At other times a continuous stream of sparks could be obtained even at lengths of around 20cm.

These sparks could very dangerous and a direct strike to the lightning rod could cause explosions and fire. A safer version of this experiment is easy to setup by using a simulated lightning rod in the form of a high voltage DC power supply such as a Van De Graff generator or Voltage Multiplier.

If you don’t have some bells available then they can be replaced by any metal object such as a drinks can. This experiment works best if all the conductors are smooth, but a foil coated plastic ball will be ok if another type of lightweight metal ball is not available.