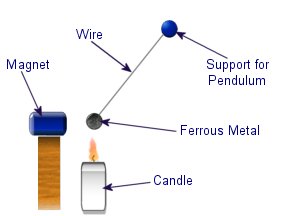 The curie effect usually refers to a magnetic phenomenon discovered by Pierre Curie. He discovered that ferromagnetic substances exhibited a critical temperature transition, above which the substances lost their ferromagnetic behaviour. This is now known as the Curie point.

A ferrous metal object such as a screw is suspended by a length of stiff wire so that it can swing freely from left to right.

To one side of the pendulums swing, a magnet is fixed into a position where it attracts the mass on the pendulum, and holds it up preventing it from swinging. The magnet must be far enough away so that it holds the mass up, but without actually touching it.

When a heat source such as a candle is place under the ferrous mass, the temperature of the material will increase until it reaches the curie point. When this occurs the thermal noise in the material prevents it from being held by the magnet and it will swing away. This will quickly allow the mass to cool and on its return swing (or before) the magnet will pull the mass back over the heat source, causing the whole process to start again.