This depth survey of Alsager Mere was done in summer 2004 when the water level was quite low. The maps can be considered to have a maximum accuracy of 4m horizontally and 0.3m vertically. The absolute edges of the mere are not shown. This is because the size can vary slightly and each garden backing on to the water has a different structure at the end.

From the maps shown below we can see that there is an unusually small deep area. It is possible that this is related to the lake being spring fed, but evidence of this is yet to be discovered. Although most of the depth readings in this area were stable there is a small area of about 1m square that causes the depth finder to jump erratically in the range of 17 to 37 feet. This could mean that there is an even deeper part, such as the opening of a spring, or it could mean that there is a sonar reflective object, which is sitting at an obscure angle. It is very difficult to get an accurate reading, as the boat that the measurements were taken from cannot be kept entirely still. This mystery will be probably be solved when the underwater camera is implemented. Unfortunately the water turbitity (murkeyness) is usually quite high so visibility is often below 50cm. 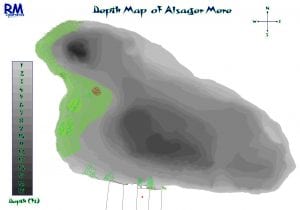 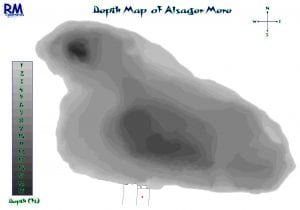 The maps above show the depths of Alsager Mere using a grayscale image. The image on the right shows where the main concentration of lilly pads were situated in summer 2004. The large concentration of smaller lillies has now been eradicated using Glyphosate (Roundup). 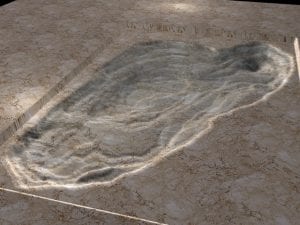 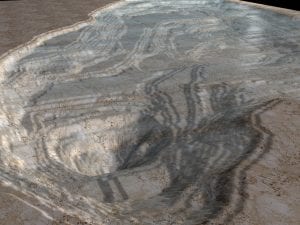 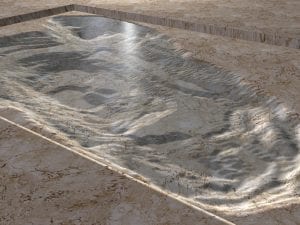 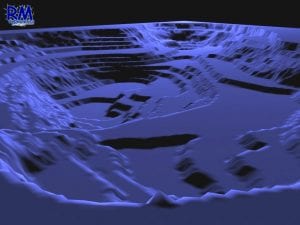 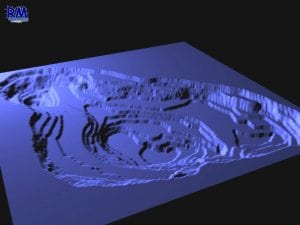 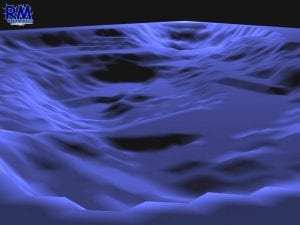 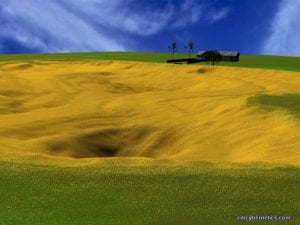 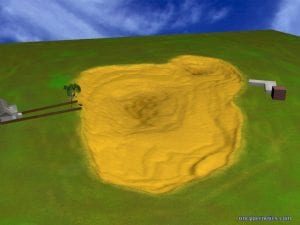 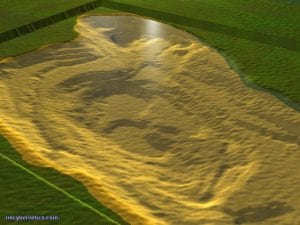 These 3D images above were extrapolated from the 2D map by using the greyscale image as a height map. The purple images have the depth exaggerated so that the features can be seen more easily. Obviously the lake bed is not made up of layers like we can see in the images, but each layer does represent each 30cm (1ft) of depth. To get a more accurate image these layers need to be merged together to leave a smoother finish.

In order to create a more realistic image, a small amount of noise (randomness) can be added to the data before it is smoothed. This method can reduce the appearance of unnatural features such as straight lines created by the depth scanning method. The 3D map can also be textured so that its appearance resembles the material from which the lake bed is made.

The images above are intended to give a more realistic view of the lake bed. A few of the surrounding houses have also been added to give a better frame of reference and scale.