Garry’s Mod, or Gmod, is a mod for Valve Software’s popular Source game engine that has been released as a full retail game. Gmod allows players to manipulate items and props from any game that runs on the Source engine that they own, including popular games such as Half-Life 2, Counter-Strike and Team Fortress 2. Gmod also supports a robust script creating and editing feature running on the Lua scripting language, allowing any player who cares to learn the language to create weapons, entities and even maps and gamemodes, all with tools and materials provided by both Garry’s Mod itself and the Source-based games that it supports. 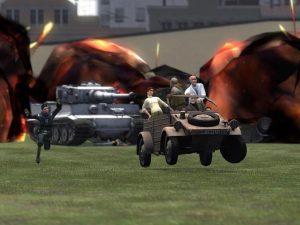 While there are several user-generated game-modes on offer, both in single player and multiplayer, the focus on Garry’s Mod is clearly on the sandbox aspect. A wealth of tools are available to the player, including the powerful physics gun – a device which allows the player to pick up, rotate, throw and freeze in place most of the game’s spawnable objects. A robust ‘tool gun’ is also one of the game’s main construction implements, containing a wealth of utilities and options that allow for more complex constructions. Among the available tools are a rope tool that allows a rope constraint to be created between two objects, a colour tool that – you guessed it – changes the colour of objects and even a face-posing tool that can change the facial expression of ragdolls (characters that do not stand up on their own and can be moved and posed with the physics gun), often with somewhat frightening results. This small selection doesn’t even scratch the surface of what’s available in the game.

Though the game’s default features present enough content to keep the typical player entertained for hours, there are also a number of community-generated naps, tools, weapons and game modes on offer. These can be downloaded from the community content site http://www.garrysmod.org/ or directly from the in-game interface. These user-generated instances expand the game’s playability and entertainment value massively.