We’ve come a long way in technology and with virtual reality on the rise, what better time than now is there to learn more about it.

Many people believe the start of the long ‘family tree’ of VR began in the mid-1950s with the Sensorama, however the idea of existing in a false reality can be traced back to the 1060s with 360° murals designed to make the viewer feel as though they’re part of the scene.

The Sensorama was designed by Morton Heilig in 1955 and a prototype was built in 1962. The revolutionary machine somehow failed to grasp investors’ attention and unfortunately never made it past the prototyping stage of development. The Sensorama was designed to entertain multiple senses, hence the name, built inside a booth, in which visitors could sit on a movable stool, Heilig imagined that, for the price of 25 US cents, visitors would be treated to multi-sensorial impressions of a virtual, ten-minute-long motorcycle ride through New York City. It would display the sights and sounds of the prototype film, whilst simultaneously providing corresponding vibrations, head movements and scented wind.

After the Sensorama came a few of ‘new’ virtual reality devices such as “The Sword of Damocles”, however this was a slow period for VR until around the late 1980s, gaming was on the rise and consoles started to become more popular.  Before long (in 1989) the Nintendo Power Glove was released, which despite many films would have you believe the power glove wasn’t as popular as people think, it never really took off as it was prone to performance issues with it awkward recognition and lack of games that took advantage of its features. The power glove paved the way for another wave of virtual reality, mainly consisting of headsets, which has lasted until this day.

And recently virtual reality is becoming popular with a wide variety of choice. We may even use VR in our everyday lives within the next decade! 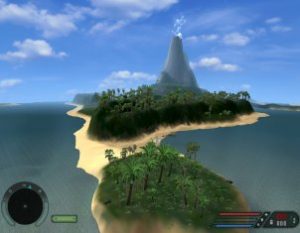 This section contains a selection of virtual worlds created in a range of formats. Computer games provide an excellent development environment, as they can offer realistic physics and special effects that are intended to improve immersion into the virtual environment. Pick a format below, or just click the ‘next’ link.

To play the game levels you must have a copy of the relevant game installed on your system.