Dwarf Fortress is a city management simulation set in a classic fantasy setting, in which the player takes on the role of the manager of a small team of diminutive dwarves setting up a colony. The main focus of the game is managing, constructing and securing the colony while keeping all of the dwarves within it happy as the population climbs. Various threats, such as disease, lava floods, sieges laid by enemy armies or even demons from deep below the earth often threaten the settlement, which is where the challenge of the game comes in as the player struggles to battle external dangers while feeding and housing the town’s ever-growing pool of occupants. One of the game’s most (in)famous features is the fact that there is no way to ‘win’ – simply preventing the destruction of the colony for as long as possible is the game’s primary goal. 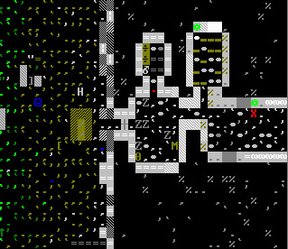 The most striking thing about Dwarf Fortress, at least to the first-time player or casual observer, is that the game’s graphics are not rendered in images or polygons, but are instead made up entirely of ASCII symbols and characters. Initially, this unique method of graphical rendering may be very off-putting. However, this lack of ‘traditional’ game graphics actually greatly aids player immersion. If the player is made to imagine the world that their dwarves live (and frequently die) in as opposed to simply having it shown to them, they will often come out with a much more vivid image of the game world. The human imagination, after all, is capable of creating much more powerful and varied imagery than a great deal of other games can do with actual polygons and shapes.

Dwarf Fortress’s initially-jarring ASCII style soon becomes normal to the seasoned player. Some things are obvious – a capital E on the map, for example, represents an elephant, while a smiling face (☻) shows the presence of a dwarf. In its simple execution and ease of understanding and use, the first impression left by the presence of these characters in lieu of actual rendered graphics moves from ‘daunting’ to ‘charming’. A great deal of objects and individuals in the game are also vividly described by the game in a manner similar to a text adventure – a great deal of information about one of the dwarves living in the player’s settlement, for example, can be accessed simply by selecting the dwarf and entering a sub-menu. Descriptions range from physical appearance to prefereces, favoured foods, fears and even the faith that the dwarf follows. 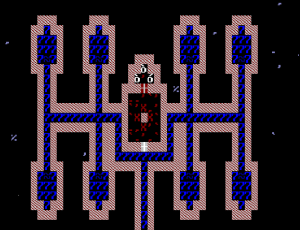 A lot of the enjoyment of the game comes from the fact that elaborate structures must often be constructed in order to fulfil the needs of the fortress. For example, in order to grow crops underground, the prospective farm plot must first be irrigated by pouring water onto it. Needless to say, simply digging a direct channel from the farm plot to the nearest river is out of the question – without a way of controlling the flow of water, the entire fortress could end up flooded. This forces the player to think of an intelligent way of solving the problem. In this case, for example, a system of floodgates and levers can be used to prevent flooding, keep dwarven farmers safe and even control exactly how much water each farm plot gets in the case of more complex irrigation machines.

The principle of using creativity to devise solutions to increasingly complex problems extends to a large number of circumstances – among the various contraptions that have surfaced over the years that Dwarf Fortress has been available are: a lava pumping system for wiping out enemy attacks, a collection of water pipes for filling and draining parts of the fortress at will, a luxurious bedroom suspended over a pit of lava by a winch that could be lowered in order to dispose of particularly annoying fortress residents, and even small rooms full of traps made of wood to allow military dwarves to train their combat skills extremely fast. The possibilities in Dwarf Fortress are completely limitless, with only the player’s knowledge of the game mechanics standing between them and the vast sea of possible contraptions on offer.