A Possible Sub-Structure for the Neutrino

This article was submitted as a term paper for a course in Particle Physics, Physics 521, given in the Spring semester by Professor Doreen O. Wackeroth, whose guidance and assistance is gratefully acknowledged. However, the paper was not accepted as I could not explain how two photons could bind together or how angular momentum would be preserved if two photons combined to form a neutrino. Possible explanations have since been added to this article.

A possible sub-structure for the electron neutrino is suggested. The neutrino may consist of two aligned photons with their magnetic and electric fields interlocked. That structure is consistent with the properties of the neutrino, including its tiny mass, velocity slightly less than the speed of light, helicity, internal frequency, failure to decay, stability, and unreactiveness. Of particular interest is the recently discovered phenomenon of neutrino oscillation, which requires a single neutrino to have two slightly different wavelengths, also consistent with the proposed structure. Calculations based on this structure yield reasonable results. A few experimentally testable predictions are made.

Introduction
As science has progressed through the ages, matter has been shown to be made of molecules, molecules of atoms, atoms of electrons and nucleons, and nucleons of quarks. Including anti-particles, there are still at least 61 “elementary” particles.1 A number of current theories, such as string theory and M-brane theory, propose sub-structures for so-called elementary particles.2 Models of neutrinos that have mass have been constructed, but none are theoretically compelling.3 The neutrino, long considered to be an elementary particle, has a number of unique properties that are suggestive of an underlying structure. It is proposed that these properties are consistent with an sub-structure consisting of two aligned interlocked photons with axes slightly twisted. The discussion will be limited to the electron neutrino, which will hereinafter be referred to simply as “the neutrino.”

Properties
Neutrinos have some very unusual and unique properties that have not been explained.

Classification
Since the neutrino has a half integer spin of ½, it is a fermion, along with other matter particles, such as the quarks, mesons, and hadrons. It is a member of the family of leptons, which includes the electron, the muon, the tau, the electron neutrino, the muon neutrino, and the tau neutrino, each of which has an anti-particle.

Forces
The neutrino feels only the weak force and gravity.

Velocity
While neutrinos were at first thought to travel at the speed of light, c, it is now known that their speed is very slightly less than c. In 1987, a supernova exploded 180,000 light-years away. Almost 30 minutes after telescopes detected light from the blast, neutrino detectors detected a torrent of neutrinos. The time lag gives a neutrino from that explosion a velocity of 0,9999999997 c (Footnote 6). Unlike other fermions, such as the electron, the neutrino does not have to be accelerated with huge amounts of energy to reach this extreme velocity – it travels at just under c ab initio, without any acceleration required. Neutrinos are believed to have a continuum of velocities7 that may depend upon their energy.8 Like the photon, the neutrino is never found at rest, or even moving at a velocity much less than c.

Neutrality
Unlike other elementary particles, which are either charged or are composite particles made up of equal amounts of positive and negative charges (e.g., the neutron), the neutrino is completely neutral. Not only is it neutral, but it is the most neutral particle known, more neutral than even the photon, as the photon has an electromagnetic field which the neutrino lacks.

Magnetic Moment
Counterintuitively for a neutral particle, the neutrino has a tiny magnetic moment of about 10-11. This is believed to be due to a loop effect, where the neutrino generates a virtual W particle, which annihilates back into the neutrino.

Decay and Stability
Neutrinos have since their conception been considered to be elementary particles.9 Since they have the smallest rest mass of any known fermion, there is no other fermion that they can decay into, and they are not known to decay.

Of all the particles, none is more stable than the neutrino. It is capable of passing through 130 light years of solid iron before interacting with another particle.10 And, unlike all the other particles, including even the electron, it is so stable that it will not annihilate even with its own antiparticle.

Energy
While the energy of a fermion depends upon its velocity, the energy of a neutrino is not due (entirely) to its kinetic energy, but also to an internal frequency, v, according to the equation E = hv. Neutrinos, like photons, have a continuum of energies proportional to their frequency.11

Proposed Sub-Structure
A photon has an electromagnetic field consisting of electric and magnetic fields at right angles. The fluctuating fields are a fixed distance apart, equal to the wavelength:

While the exact structure of the photon is not known, it is generally pictured as consisting of several complete cycles with the amplitudes of the cycles diminishing at the ends of the wave train.12

The properties of the neutrino may possibly be explained if the neutrino consisted of two intertwined photons moving together with their electric and magnetic fields interlocked. (A good analogy is double stranded DNA, where the sense and antisense strands bind to each other through base pairs.) An end view of the two photons would show the attraction between opposing electric and magnetic fields: 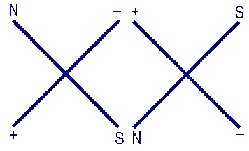 While photons do not bind directly to other photons as there is no carrier of a binding force, photons can fluctuate into a hadronic state via the reaction by forming a quark-antiquark pair, and they can bind the two photons together.13 (A fluctuation into an electron-positron pair may also produce binding.) A fluctuation to a quark-antiquark pair or to an electron-positron pair would also account for the slight magnetic moment of the neutrino.

The interlocking of these fields should not only cancel any external or net electric and magnetic fields that the two photons would otherwise display, but should bind the two photons together through the powerful electromagnetic force, giving the neutrino its extraordinary stability.14 If the average distance between the centers of the fields is small, the electromagnetic force would be very large, ample to prevent the neutrino from breaking apart in even the most energetic collisions.

It is further proposed that the axes of the two photons are not linear, but spiral slightly around each other (as a DNA double helix does) as shown in the following drawing of the two axes

The slight rotation of the axes may be due to the reduced amplitude of the photons at the ends of their wave trains, which may pull the trains together at their ends, twisting the axes of the photons. Also, if the two photons do not have exactly the same wavelengths, the fields may be directly opposite at the centers of the wave trains, but offset slightly at the ends, which may twist their axes.
There will be, of course, two possible configurations for the neutrino, a clockwise twist and an counterclockwise twist, corresponding to an anti-neutrino and a neutrino, and this would explain why the anti-neutrino differs from the neutrino in helicity rather than in charge. There is no reason to expect that the conflicting helicities of the neutrino and the antineutrino would result in the disengagement of the photon pairs that comprise them, should the neutrino collide with its anti-neutrino, and no such annihilation has been observed. This would be consistent with the proposal that the neutrino is a Majorana particle and does not have an anti-particle.

If the axes are twisted slightly, then other properties of the neutrino may be explained. First, while each photon would continue to move at the speed of light, each would now follow a helical path instead of a linear path. Thus, the photon velocity c will have a forward component and a rotational component. The forward component of the velocity of the photon will be equal to the velocity of the neutrino, which will be slightly less than c.

If the proposed structure is correct, the number of helical rotations per linear distance of neutrino travel should be proportional to the frequency of the photons because the amount of twisting should depend upon the binding force between the two photons, which should increase with frequency. That is, if the two photons that comprise a neutrino have a long wavelength, they should travel a long linear distance for each helical rotation and if they have a short wavelength (high frequency) they should have many rotations in that same distance.

Moreover, the rotational component of the velocities of the photons in the intertwined pair will be observed as rest mass.15This can be most easily seen by imagining for a moment that the entire velocity of the photons is rotational. In that case, the neutrino would be at rest, relative to the laboratory frame of reference, and its entire energy could be measured by weighing it. In other words, its entire energy would be in the form of its rest mass.16 If that is true, then when the rotational component of the velocity of the photons in the neutrino is tiny, the rest mass would be correspondingly tiny.

In order to match the electromagnetic fields of the two photons, the two photons will have to have approximately the same wavelengths. Since the light spectrum is continuous, this means that neutrinos can also have a continuous spectrum of wavelengths, which explains the internal frequency of the neutrino that gives neutrinos different energies.

The two slightly-differing wavelengths of the photons in the neutrino interfere slightly, which creates an oscillation between two different frequencies,18 which would correspond to the different flavors of neutrino. While the electromagnetic coupling between the two photons that comprise a neutrino would be maximized if the two photons had exactly the same wavelength, a small difference in wavelength would not reduce the binding force much, especially if the wave train is not very long.

Also, since both of the photons in a neutrino must have wavelengths that are nearly the same in order to bind together, this suggests that if a laser beam is split, one portion is rotated 90° and the two portions are recombined colinearly with reversed electric-magnetic field positions (e.g., possibly by moving in opposite directions), it may be possible to create neutrinos from photons.20 This would not violate conservation of angular momentum if (1) the photons move in opposite directions, (2) a photon moving in the opposite direction had an angular momentum of -1, and (3) a neutrino- antineutrino pair was created.

Since neutrino oscillations require that the two photons have slightly different wavelengths, it may be possible to produce neutrinos that do not oscillate by using photons that have exactly the same wavelengths. And, unless there is a quantum effect,21 unique neutrinos other than the electron, muon, and tau neutrinos might be created by controlling the difference between the wavelengths.

Next Page: Photon Violation Spectroscopy
Previous Page: A Theory Of Everything