One of the cheapest and popular ways of generating high voltages at relatively low currents are the classic multistage diode/capacitor voltage multipliers, known as Cockcroft Walton multiplier, named after the two men who used this circuit design to be the first to succeed in performing the first nuclear disintegration in 1932. James Douglas Cockcroft and Ernest Thomas Sinton Walton, in fact have used this voltage multiplier cascade for the research which later made them winners of the 1951 Nobel Prize in physics for “Transmutation of atomic nuclei by artificially accelerated atomic particles”. Less known is the fact that the circuit was first discovered much earlier, in 1919, by Heinrich Greinacher, a Swiss physicist. For this reason, this doubler cascade is sometimes also referred to as the Greinacher multiplier.

Unlike transformers this method eliminates the requirement for the heavy core and the bulk of insulation/potting required. By using only capacitors and diodes, these voltage multipliers can step up relatively low voltages to extremely high values, while at the same time being far lighter and cheaper than transformers. The biggest advantage of such circuit is that the voltage across each stage of this cascade, is only equal to twice the peak input voltage, so it has the advantage of requiring relatively low cost components and being easy to insulate. One can also tap the output from any stage, like a multitapped transformer. They have various practical applications and find their way in laser systems, CRT tubes, hv power supplies, LCD backlighting, power supplies, x-ray systems, traveling wave tubes, ion pumps, electrostatic systems, air ionisers, particle accelerators, copy machines, scientific instrumentation, oscilloscopes, and many other applications that utilize high voltage DC. 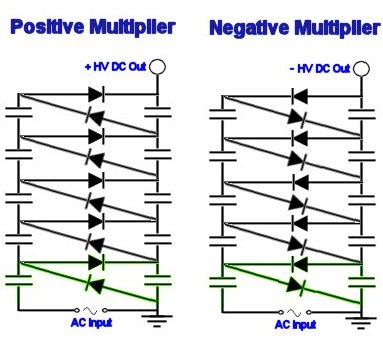 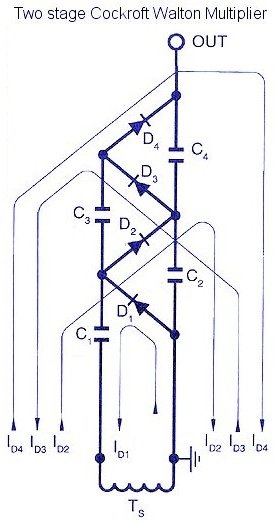 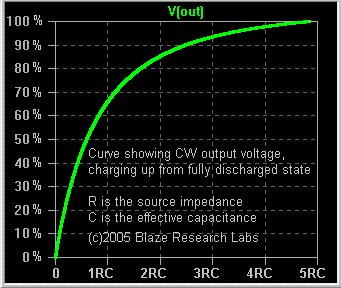 The polarity of the high voltage output is simply determined by the configuration of the diodes, as shown in the diagrams above.

2 stage multiplierThe Cockcroft Walton or Greinacher design is based on the Half-Wave Series Multiplier, or voltage doubler. In fact, all multiplier circuits can be derived from its operating principles.

The following description for the 2 stage CW multiplier, assumes no losses and represents sequential reversals of polarity of the source transformer Ts in the figure shown below.

Several cycles are required to reach full voltage. The output voltage closely follows the curve of an RC network as shown above. R is the output impedance of the ac source, whilst C is the effective dynamic capacitance of the CW multiplier. This charging occurs only upon switching on the CW multiplier from a discharged state, and does not repeat itself unless the output is short circuited. Most common input AC waveforms are sine waves and square waves.

Three stage CW multipliers, commonly known as tripler, were used in most of the early B&W and colour TV’s. The voltage drops rapidly as a function of the output current. In some applications, this is an advantage. The output V/I characteristic is roughly hyperbolic, so it serves well for charging capacitor banks to high voltages at roughly constant charging power. Furthermore, the ripple on the output, particularly at high loads, is quite high.

Increasing the frequency can dramatically reduce the ripple, and the voltage drop under load, which accounts for the popularity of driving a multiplier stack with a switching power supply. A clever way to reduce ripple is to implement a full wave voltage doubler as shown below. This effectively doubles the number of charging cycles per second, and thus cuts down the voltage drop and ripple factor. The input is usually fed from a centre tapped ac transformer or MOSFET H-bridge circuits.

A voltage multiplier is a great way to create a high voltage DC power supply. It is very easy to generate high voltages from easily available components. The next section contains information on where to buy the components and how to connect them. It also gives details of sources of high voltage power supplys which will run from batteries. Check out our DIY articles for more details

This information is for educational purposes. Replicating this project is done so entirely at your own risk