Minecraft, the game that took the world by storm without warning, Mojang’s most successful title was initially released in 2009. It wasn’t until after the early stages of the beta release in around 2011 and onwards that it gained a sizable following with popular Youtubers such as The Yogscast, SkyDoesMinecraft, Captain Sparklez and Stampylongnose gaining their fame from it while simultaneously spreading the game’s popularity across the globe. In a game where you can build whatever you want or even destroy towns with complex TNT firing machines, your imagination is truly the limit. 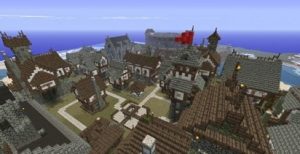 With the tool of creation being blocks anything that can be displayed using pixels can be made using blocks; its simplicity is very likely its greatest feature. With effort of the online community this infinitely expansive, randomly generated world can be even more immersive with mods which can add anything from a new item to a new way to play the game entirely, now rather than aiming to kill the infamous ender dragon or building the best city you can think off, the new challenge may be to make a fully automated farming system using the forestry mod or getting to space in your new rocket using galacticraft. 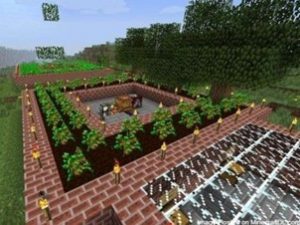 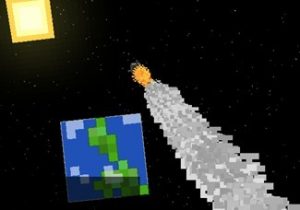 And if you don’t feel like collecting all the resources to create your giant city you can make a world on “creative mode” to fly around and gain access to an infinite amount of any item necessary for your creative needs leaving you free to create all that your heart desires.

Minecraft even has its own type of electrical systems utilising a resource known as redstone with which you can make a wide range of things from a simple light switch to hidden doors with piston and redstone or a digital clock using block swappers, like many other aspects of this game the possibilities are endless.There are two main aspects of vanilla (without mods) Minecraft; mining and crafting (I bet you didn’t see that coming) these two aspects work hand in hand. First you craft yourself some basic wooden tools using wood you got from beating up trees you can then use those tools (manly the pickaxe) to gain better resources to make even better tools (see chart below for more details).

If you’ve never played Minecraft before you are probably thinking “enchantability?” yes, you can use a few rare materials to make yourself an enchantment table to improve your tools weapons and armour with many different enchantments such as water breathing, unbreaking, sharpness and more giving a whole new layer of depth to an already Marianas Trench of a game. 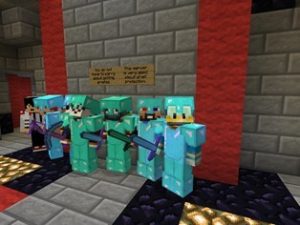 If you eventually grow tired of creating, destroying, killing, exploring and surviving against the hordes of monsters that come out at night then you can join friends on player created servers, most of which host minigames such as a recreation of the Hunger Games event. or you could host your own server and have friends join you in making your world.

We highly recommend not using the cheat codes, but if you must, then hit the T key to open the chat, all commands must begin with a / otherwise it would be treated as a regular message.

There many caommands, a few of which are listed below. More can be found on the minecraft wiki on gamepedia (http://minecraft.gamepedia.com/Commands)

Spawn Point (This will change where the player respawns after death,This will not affect the server/world spawn. It basically acts like an invisible bed for a specified player):

/gamerule doFireTick – This changes whether or not fire should spread too flammable blocks.

/gamerule doMobLoot -This changes whether or not mob’s drop loot/items when killed.

/gamerule doMobSpawning -This changes whether or not mobs should spawn naturally.Spawning mob out of dispensers should still work.

/gamerule doTileDrops – This changes whether or not blocks drop as an entity when destroyed (does not work for paintings).This also works with explosions.

The give command will give a certain player a certain item.It is used as follows:

/give [player] [ID] – This will give specified player a certain item. Find Data Values here: http://minecraft.gamepedia.com/Data_values

Adds an enchantment to a player’s selected item, subject to the same restrictions as an anvil. /enchant [level]