Current Robots in Use Today

Most of the current robot population is made up from toys or industrial manufacturing systems. As we see more advanced robotic toys in our homes, we are also beginning to see practical robots that can help us with our daily lives. This page will show you some examples of such robots, and where you can get one for yourself. 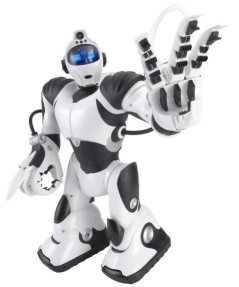 The Robosapien is a humanoid, biped robot, capable of performing a range of surprisingly advanced functions. The first breed of Robosapien was released in 2003, but now a new generation has been released with even more features. Mark Tildens latest model, the ‘Robosapien V2’ is a whopping 2 feet tall. Being much bigger means more room for high tech electronic gizmos!

This Robosapien V2 can walk around whilst talking to you or its pet dinosaur, Roboraptor. It can even interact with objects using its precision gripping, articulated fingers. A multitude of sensor systems, such as laser tracking, infrared vision, and colour vision, allow the Robosapien to be highly dynamic in the way in which it interacts with the environment.

This robot is not only an amazing toy but it represents the next generation of robotic entertainment. The systems developed for the Robosapien are paving the way for the technology of the future. 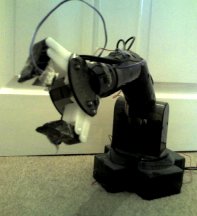 Robot arms are often used in industrial manufacturing processes. They are gradually replacing human labourers as they can work non stop 24/7, and the work they produce is highly precise and repeatable. New robotic systems may be very expensive to set up, but they will often generate enough revenue to cover the initial costs in a matter of months.

Most industrial robots functions are done ‘blind’. This means that it is simply following pre-programmed moves in sequence, without using sensors (except position encoders) to verify that it is functioning correctly.

This method is commonly used as it is much cheaper than others, but it also has its drawbacks. An accidental collision will cost a lot to fix. Not only is production stopped, but also the tool needs to be millimetre perfect due to the ‘blind’ action of the robot.

Simply replacing the damaged parts is not always possible as it is extremely difficult to get an exact replacement. Often the robot must be reprogrammed to compensate for the slight differences in the new parts.