The Turing Test is a method derived by Alan Turing in the 1950’s. It is supposed to determine if a machine is intelligent or not. The test uses a type of ‘imitation game’ where the AI and a real person are interrogated via a computer screen. The tester would pose questions to both computer screens and would try to judge the responses in order to determine which one was the human. 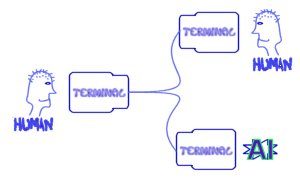 Turing suggested that if the tester could not determine which was the human, then the AI must truly be an AI. This method has its obvious flaws. Intelligence itself is hard to define, and human intelligence can vary dramatically from person to person; therefore it may be very difficult to choose the right people for the Turing testing process. As the intelligence level of the AI is an unknown it would be impossible to know who to test it against. For example if the human being interrogated was of less intelligence than the AI’s programmed level of intelligence, the tester could easily fail in determining which was human and which was AI. According to the Turing test this inconclusive result would mean that the AI was intelligent! Just because the tester cannot ‘out wit’ the tested it does not mean that they are intelligent. There are many Chess programs available, which could probably ‘out wit’, a player many times, but this does not make it intelligent. It may simply mean that it is better equipped to deal with the challenge than the player. The same applies for the ‘imitation game’ of the Turing test.

It is possible that a true test for AI will never be found, as intelligence comes in so many different shapes and forms. It is likely that as ‘AI’ is gradually introduced into our lives we will become accustomed to it, and will see advanced AI programs as highly intelligent, and less advanced ones as less intelligent. We will have to merely assume that they are intelligent to a certain degree, as we can’t truly judge intelligence until we can fully understand our own.