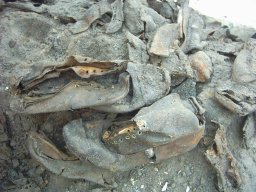 A local resident was digging in his garden when he uncovered some very old leather shoes followed by some bones.

The hole they were found in was a narrow one for sinking a post into, and the items were all found at the same depth. This made it obvious that they were buried at around the same time.

The photos below were shown to a radiographer friend who though they may be human. The police were contacted and came to investigate the mysterious find. Pathologists struggled to identify the bones but it was eventually concluded that they were not human bones. 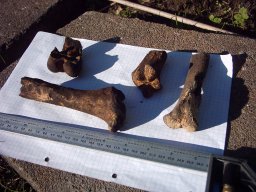 These photos show what was found. The top image shows two very old leather boots, and you can also see other less intact leather shoes behind.

This lower image shows the bones that were found in the hole with the shoes. They have been identified as leg bones from an animal.

If you have found any artifacts or have any news about changes or history around Alsager Mere you can post a message and an image using the “Add your Comment” button below.