This type of thruster generates magnetic fields by passing an electric current through a liquid conductor, such as sea water. Using another magnetic field, the liquid can be pushed in a chosen direction, therefore generating thrust. You can easily make one of these devices from household materials and a couple of neodymium magnets. In the diagram below the small arrows represent the intersecting electric and magnetic fields. the large blue arrow represents the flow of water. 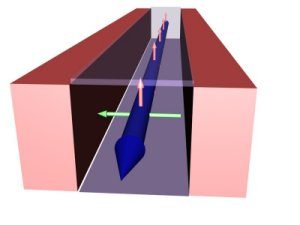 MHD is attractive to engineers because it has no moving parts, which means that a good design might be silent, reliable, efficient and inexpensive. Also known as a caterpillar drive for submarines, this was popularised in the movie The Hunt for Red October as being a “silent drive,” an undetectable stealth super weapon in submarine warfare. In reality, the current travelling through the water would create a great amount of gases, and thus noise.

In the 1990s, Mitsubishi built several prototypes of ships propelled by an MHD system. These ships were only able to reach speeds of 15 km/h despite projections of higher ones;

Japan began sea trials of a prototype magnetic ship. Yamato 1 is propelled by two MHD (magnetohydrodynamic) thrusters that run without any moving parts. When completed, the MHD ship should be able to attain speeds of more than 100 knots (125 miles or 200 kilometers per hour), with little noise. This is several times the top speed of today’s ships, which are slowed down by turbulence created by the ship’s propellers. MHD works by applying a magnetic field to an electrically conducting fluid. The electrically conducting fluid used in the MHD thruster of the Yamoto 1 is seawater.

If fuel cells become common, MHD propulsors may have lower costs in some applications than electric motors driving propellers.

A number of experimental methods of spacecraft propulsion are based on magneto hydrodynamic principles. In these the working fluid is usually a plasma or a thin cloud of ions. Some of the techniques include various kinds of ion thruster, the magneto plasma dynamic thruster, and the variable specific impulse magneto plasma rocket.
Info from Wikipedia

This type of thruster uses electricity as a power source instead of fuel. Although it requires a propellant gas for generating the plasma and transferring momentum. It works on the same principle as the Magneto Hydrodynamic thruster except that the propellant gas is used instead of the seawater.

As the current flows in the gas its magnetic field interacts with the magnetic field produced by current in the cathode and the anode casing. External magnets can be used to further control the plasma.

Although the magnetic interaction accelerates the plasma, thrust is also produced from the rapid expansion of the now hot propellant gasses.