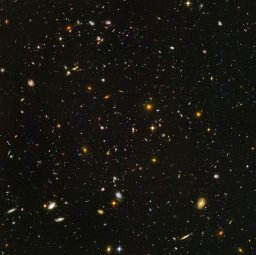 This section deals with the big stuff in physics, and when we say big we mean really big. Planet Earth is but a mere spec of dust in the massive and diverse realm of outer space. Considering that we all live on Earth, this section explains some of the fascinating phenomenon in space and how such things may affect our tiny planet.

To get a feel for how massive the universe is, check out the deep field image from the hubble telescope. This image not only shows the really distant, but the realy old. Some of the galaxies are believed to be 800 million years old.

The images below are from NASA and represent the latest data from SOHO. Press refresh in your browser to update the images.

A View of the Heavens From Texas

Amateur astronomers gathered for the 34th Texas Star Party, which offered them a chance to gaze at a sky full of nothing but stars. More..

Considering the Universe From Deep in West Texas

In its 34th year, the Texas Star Party drew more than 500 amateur astronomers from across the United States and Canada to gaze together into the vast open skies. More..