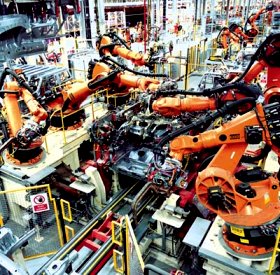 As automation technology becomes cheaper and more advanced, companies will increasingly use machines instead of humans. This is already commonplace in the manufacturing industry and is also becoming more popular in warehousing. The current popular method of automating machinery is to use PLC’s (Programmable Logic Controllers) These are small and tough computers that can have a range of IO’s (inputs and outputs) for sensors, actuators, and data links to other computers.

Robotic arms are widely used in the manufacturing industry. They were first seen in car assembly lines over 30 years ago. There are now a wide variety of arm type robots available, one of which, the spider robot is particularly fast.

The steady fall in prices of PLC and robotic hardware means that it is now possible to install a system at a reasonable cost. A new robot or automated machine can often generate enough revenue to pay for itself in just a a few months.

Large warehouses are now beginning to take advantage of the falling price of RFID (Radio Frequency IDentification). This technology is basically an upgrade to our existing barcode system, as it is used for identifying items, but it uses wireless technology instead of laser scanners. It is the price of the RFID tag (barcode) that has been limiting the advance of this technology, but now the price is around 1p per tag it is becoming more popular. This one pence is still considerably more expensive than the price of a barcode (~0.0001p) so this is preventing them from being used anywhere but in large distribution centers or warehouses. As prices continue fall we will no doubt see them on our groceries in shopping centers with no tills. You could simply swipe your credit card on your way in to a shop, then you could take anything from the shelves and leave the shop. The price of the items would be collected using RFID and the total automatically taken rom your credit card.