(From an AI designers Perspective)

In our eyes there are sensors (photoreceptors) to pick up light intensity, or frequency (colour). Rods are the photoreceptors which detect light intensity and Cones are responsible for detecting colour and detail. The eye works much like a CCD camera. It contains an array of sensors that can individually send information to the brain. The array in the eye is connected via the optic nerve to another array in the brain (like the pixels of a monitor screen but in 3D and jumbled around). This array is arranged in such a way that circles or straight lines seen by our eyes are sort of overlaid on in it so that we can match patterns and recognize objects as being separate to other objects. This plays a crucial part in optical illusions.

The image we ‘see’ is constructed in the visual cortex (in the occipital lobe) This image is literally mapped spatially in 3D, but in randomized patterns, in the electrochemical states of the neurons of the visual cortex.

The brain acts like a combined parallel and serial processor. The images mapped onto the visual cortex will stimulate other neurons that are connected. If there is any similarity between the pattern in the visual cortex and other patterns in other parts of the brain then your memory will form a link, and this is why our thoughts tend to flow in a sequence. Another way links are formed in the brain is through resonance. Cyclic impulses in groups of neurons can resonate or become in phase with similar cycles elsewhere in the brain. In this sense the link is an electromagnetic one. But how do I remember something that doesn’t match anything already in my brain? Quite simply you don’t! Only repeated or intense stimulation of the same neurons will allow them to eventually link to something else and become used in a memory event.

Imagine a neuron acting like a glowing piece of charcoal. If we stimulate it (blow on it) briefly, it will glow brighter, heating the neighboring neurons, and then it will fade. If we repeatedly stimulate it the heat will be able to spread to more neurons as it wont get time to fade out. This analogy also works for a single intense stimulation. Feedback loops in large groups of neurons could be formed due to the sheer number and complexity of neurons involved. These loops cycle at a range of frequencies which could reflect our general state of awareness, moods, or emotions. Try to visualize billions of these ‘charcoal neurons’ clumped together and being stimulated from a variety of external and internal sources. It should become easier to see how the brain might be functioning. Hopefully you can now understand why your memories will fade with time if they are not re-stimulated regularly.

When you close your eyes and ‘see’ images you are accessing memories, and combining them with some noise (randomness) to form an image in the visual cortex. This is done in a similar way to the way the image from eyes is mapped onto the visual cortex. 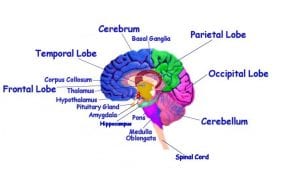 When a neuron is running out of oxygen it will tend to become stimulated, or latch on. When someone dies (or nearly dies) their brain will inevitably begin to run out of oxygen. This causes all the neurons to become hyper stimulated (depending on which run out first). As this happens all our memories could come alive and your life could ‘flash before your eyes’. (This is how the Thaller creativity machine works) Eventually the visual cortex will become over stimulated causing you to ‘see’ bright white light, possibly in the shape of a tunnel. After a short time the life processes would cease and there would be insufficient living neurons left to support any complex activity.