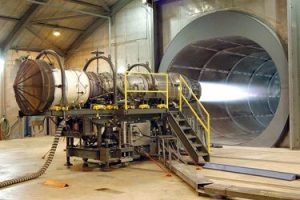 Wikipedia v
A jet engine is any engine that accelerates and discharges a fast moving jet of fluid to generate thrust in accordance with Newton’s third law of motion. This broad definition of jet engines includes turbojets, turbofans, turboprops, rockets and ramjets, but in common usage, the term generally refers to a gas turbine used to produce a jet of high speed exhaust gases for propulsive purposes.

A turbojet engine is a type of internal combustion engine often used to propel aircraft. Air is drawn into the rotating compressor via the intake and is compressed to a higher pressure before entering the combustion chamber. Fuel is mixed with the compressed air and ignited by flame in the eddy of a flame holder. This combustion process, significantly raises the temperature of the gas. Hot combustion products leaving the combustor expand through the turbine, where power is extracted to drive the compressor. Although this expansion process reduces both the gas temperature and pressure at exit from the turbine, both parameters are usually still well above ambient conditions.

The gas stream exiting the turbine expands to ambient pressure via the propelling nozzle, producing a high velocity jet in the exhaust plume. If the jet velocity exceeds the aircraft flight velocity, there is a net forward thrust upon the airframe.

Under normal circumstances, the pumping action of the compressor prevents any backflow, thus facilitating the continuous flow process of the engine. Indeed, the entire process is similar to a four-stroke cycle, but with induction, compression, ignition, expansion and exhaust taking place simultaneously. The efficiency of a jet engine is strongly dependent upon the Overall Pressure Ratio (Combustor Entry Pressure/Intake Delivery Pressure) and the Turbine Inlet Temperature of the cycle.

It is also perhaps instructive to compare turbojet engines with propeller engines. Turbojet engines take a relatively small mass of air and accelerate it by a large amount, whereas a propeller takes a large mass of air and accelerates it by a small amount. The high-speed exhaust of a jet engine makes it efficient at high speeds (especially supersonic speeds) and high altitudes. On slower aircraft and those required to fly short stages, a gas turbine-powered propeller engine, commonly known as a turboprop, is more common and much more efficient. Very small aircraft generally use conventional piston engines to drive a propeller but small turboprops are getting smaller as engineering technology improves.

The turbojet described above is a single spool design, where a single shaft connects the turbine to the compressor. Higher Overall Pressure Ratio designs often have two concentric shafts, to improve compressor stability during engine throttle movements. The outer (HP) shaft connects the High Pressure (HP) Compressor to the HP turbine. This HP Spool, with the combustor, forms the core or gas generator of the engine. The inner shaft connects the Low Pressure (LP) Compressor to the LP Turbine to create the LP Spool. Both spools are free to operate at their optimum shaft speed.

Most modern jet engines are actually turbofans, where the LP Compressor acts as a fan, supplying supercharged air to not only the engine core, but to a bypass duct. The bypass airflow either passes to a separate Cold Nozzle or mixes with LP Turbine exhaust gases, before expanding through a Mixed Flow Nozzle.

Forty years ago there was little difference between civil and military jet engines, apart from the use of afterburning in some (supersonic) applications.

Civil turbofans, today, have a low specific thrust (net thrust/airflow) to keep jet noise to a minimum and to improve fuel efficiency. Consequently the bypass ratio (bypass flow/core flow) is relatively high (usually much greater than 3.0). Only a single fan stage is required, because a low specific thrust implies a low fan pressure ratio.

Today’s military turbofans, however, have a relatively high specific thrust, to maximize the thrust for a given frontal area, jet noise being of little consequence. Multi-stage fans are normally required to achieve the relatively high fan pressure ratio needed for a high specific thrust. Although high Turbine Inlet Temperatures are frequently employed, the bypass ratio tends to be low (usually significantly less than 2.0).
^ Info from Wikipedia ^

The valveless pulse jet engine or pulse detonation engine is the most simple type of jet and is therefore popular among hobbyists as a DIY project. it is often referred to as a ‘tuned pipe’ because its operation depends upon making the parts the right size and shape so that it fires, or resonates at the engines natural, fundamental frequency.

This pulse jet is made from modified copper plumbing parts. Due to the materials used it could only be safely operated for a few seconds, but this was enough to demonstrate the principles of operation. The fuel was provided from a cheap blow torch and was injected into the combustion chamber. This chamber also contained a tiny homemade spark plug. The spark rate could be controlled by varying the power to a HV capacitor connected in parallel with the spark plug.

This image show the basic ‘tuned pipe’ without the spark plug and gas supply. Tuning was achieved by altering the length and width of the parts used. This was quite simple as there are wide range of plumbing parts that will easily fit together.